A group of young people have made it their mission to protect a primary forest in northwest China’s Qinghai province. With an average elevation of 3,100 meters and an area of more than 100,000 hectares, the Make River forest, located in Banma county, Qinghai province, is a primary forest with the highest elevation and largest area in the Three Rivers Headwaters Region.

Thanks to the efforts of a group of young people, the primary forest, once a wood base in the province, is being turned into a key natural forest resources protection area in Qinghai.

About 233 rangers in the forest are in charge of forest inspection and management, and around 30 percent of them are under 30 years old. Each ranger usually walks about 9 kilometers in the mountains every day and works more than 300 days a year.

“My duties vary from forest management and fire prevention to disease and insect pest prevention reports and wildlife monitoring,” said one 30-year-old ranger in the forest. 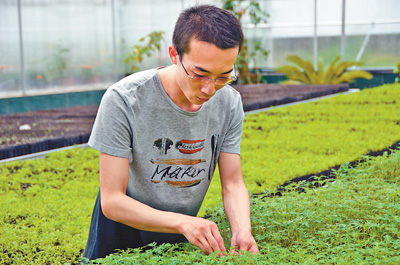 Since he started working in the forest about three years ago, Zhang Qicheng, a forestry graduate from Southwest Forestry University, has documented the species and conditions in each area of the forest and accumulated a great deal of experience in tree planting.

“My job is to make preparations for tree planting, and observe the conditions of trees, both to help them grow better and healthier,” said Zhang.

Seventy-two regular employees at the forest have a bachelor’s degree or above, accounting for nearly half of the total number of employees, which resulted in a great improvement in the quality of the trees.

To date, the total number of transplanted seedlings in the forest has increased to 4 million from 400,000 back in 2017, with the retention rate of new seedlings rising to 85 percent from 30 percent during the same period.

Due to the high altitude, few tree species can be planted in the area, and it is difficult for those transplanted from outside the region to survive, which makes the cultivation of independent species particularly important.