Zhang Han, a woman born after 1995, traveled abroad three times in 2019 and made an expensive trip to south China’s Hainan province in August 2020, demonstrating her strong spending power.

Disclosing her consumption habits, she said, “I have always spent a lot of money on food, beverages and entertainment and paid more for clothes, shoes and handbags.” 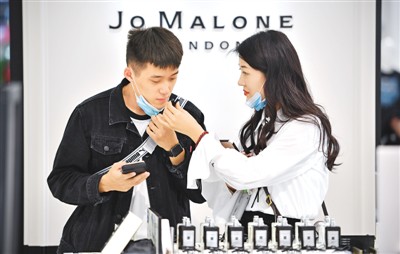 China has numerous young free spenders just like Zhang. A rough calculation shows that there are about 170 million people aged between 20 and 29 years old in the country. They are becoming the new engine for consumption, said Fu Yifu, a senior researcher at the Suning Institute of Finance.

Young free spenders in second-tier cities and below account for only 25 percent of the respondents but almost 60 percent of 2018’s total spending growth over 2017, the China consumer report 2020 from McKinsey & Company said.

Partly because of the rise of Gen Z (people born between 1995 to 2010), China’s luxury sales were estimated to grow by a stunning 48 percent in 2020, with the global luxury market declining at an expected rate of 23 percent, according to a report from Bain & Company. The report added that Gen Z’s purchase of luxury collaborations and limited editions grew 300 percent to 400 percent between January and October 2020.

Data also show that young people between 18 to 29 years old account for over 57 percent of the total consumers of high-end luxury beauty brands.

The rise of young consumers means that their personalized consumption of quality products is expected to promote industrial upgrading and bring enormous opportunities to the high-quality economic development, Fu added.

Many enterprises are benefiting from the rise of this specific group.

Chinese beverage brand Genki Forest, which produces an eponymous brand of sugar-free and low-calorie drinks, has become a real hit over the last two years.

Zong Hao, the company’s vice president, attributed the company’s success to its efforts to meet young consumers’ demand for healthy and tasty drinks. Over the past two years, the company topped the rank in online beverage sales in China, and Gen Z became the major consumers of the brand.

In the past two years, Bosideng has rolled out measures to attract younger consumers, including making its debut at London Fashion Week, releasing collections with Disney and Marvel, launching a professional collection in collaboration with the Chinese Antarctic Research Expedition, and cooperating with top international designers including Jean Paul Gaultier, the former creative director for French luxury house Hermès.

“Before 2018, our down jackets were a choice for mainly middle-aged and elderly people, but after 2019, people who buy our jackets are eight years younger than the average age of previous customers,” said Gao Xiaohong, assistant president of Bosideng International Holdings Limited.