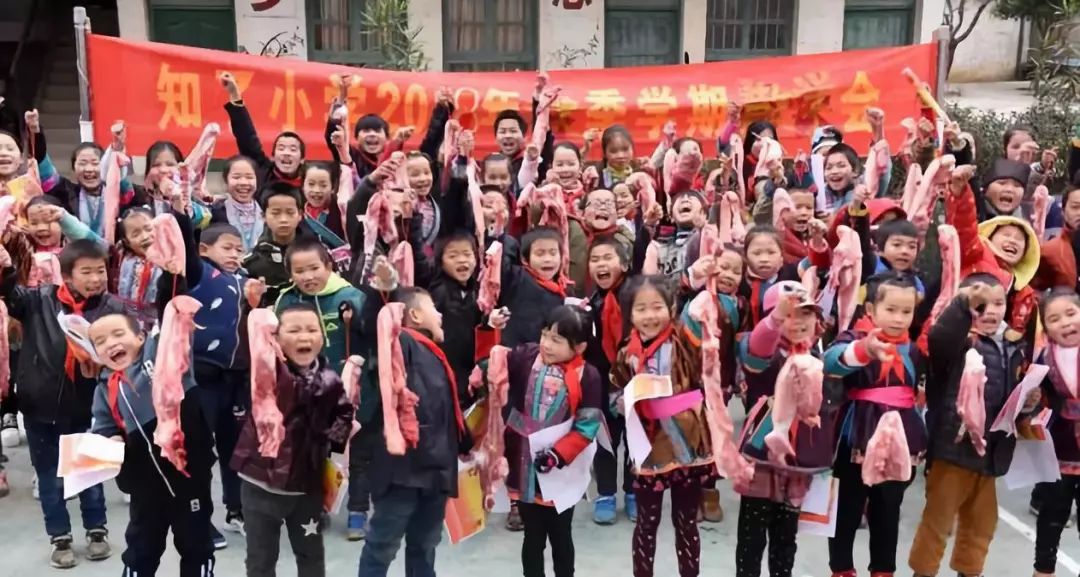 A few days ago, about 70 students at a school in Dudong Town, Sanjiang Dong Autonomous County of south China’s Guangxi Zhuang Autonomous Region, were each awarded 1.5 kilograms of pork alongside a certificate of merit.

The pork was purchased from local poverty-stricken families, and the decision to give meat as a prize had been carefully considered by teachers.

A similar case occurred in a junior middle school in Nan’an, Quanzhou City of southeast China’s Fujian Province. On Nov. 23, 2018, the school awarded between 1.5 kg and 2.5 kg of pork knuckle to students who got top marks in the midterm exams.

The Chinese character for pork knuckle “ti” sounds similar to the characters meaning “writing one’s name on an honor roll.” Therefore, according to the school management team, this gift symbolised placing a name at the top of the student list.

It seems that many students are no longer satisfied with material prizes, with some asking to be awarded with bargaining chips, such as a card that exempts you from a piece of homework, or a medal that gives you the right to refuse to write weekly journals.

One class from Hangzhou’s Jingfang middle school asked their teacher to “call his/her parents in front of the whole class and compliment him/her for no less than 5 minutes”.

Furthermore, a primary school in Hangzhou encourages students to win “coupons” for good behavior. These coupons entitle students to various awards. Currently, “watching a movie with the headmaster” is the most popular prize.

Items of everyday use

A university student who won first prize in an 800-meter race was awarded two family packs of body wash, which lasted him until graduation.

During one school sports day, students who came in first, second and third in the relay race were awarded an electric blanket, kettle and thermos set, and paper handkerchiefs.

A house and a marvelous amount of money

A student surnamed Wu, who received the highest Gaokao score among all science students in Enping City, Jiangmen City of Guangdong Province, was awarded an apartment with a floor area of 133 square meters in 2016.

In 2014, students in Enping who were accepted to China’s top universities, Tsinghua University and Beijing University, had the chance to win a prize of 1 million yuan (about $148,998).

Jincheng City of north China’s Shanxi Province also held a grand ancient-style ceremony in 2015 to recognize students who got the highest Gaokao score in their respective provinces. Ten outstanding students from many Chinese regions were awarded ancient-style titles, dictionaries, and enjoyed an imperial-style banquet.

The ten students, while dressed in traditional outfits of the Number One Scholar in ancient China’s highest imperial examination, joined a parade along the street on horseback, which was the way extraordinary scholars were recognised in ancient China.