A teenager known for his heroics in the massive Wenchuan earthquake in 2008 has now become an experienced fireman who has served his country for 9 years. 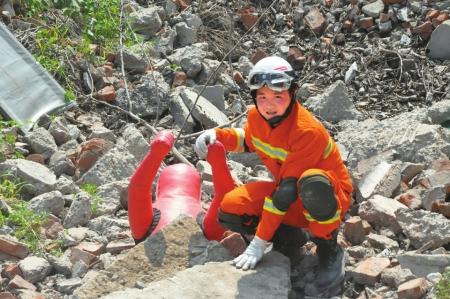 The fireman, named Jia Xiaolong, saved three of his classmates and one of his teachers 10 years ago as a 16-year-old student, when an 8.0-magnitude earthquake hit Wenchuan county, southwestern China’s Sichuan province.

Jia was in a class when the quake occurred. When the earthquake hit, he was stunned by the falling debris, but he still managed to save the lives of the others in his class, driven by an inexplicable power after waking up.

“It is indeed scary when I recall this experience, but there was no time left for me to feel the fear back then,” Jia said.

In the ruins, Jia was impressed by the servicemen in camouflage who never stopped saving lives despite their fatigue. It was because of this that he made his choice to join the army in 2009.

Jia said it was cool to be a serviceman at that time, but now he is fully aware of the responsibility that he shoulders.

From 2009 to 2016, he has attended over 4,000 disaster and rescue relief missions, and has won the third-class Meritorious Service Medal four times. He even came close to losing his own life during a rescue mission of a gas explosion accident in Beijing.

In September 2016, Jia was recommended to the Public Security Fire Force College by his unit. After two years of study, he will once again be on the front line, embarking on a new journey in June this year.