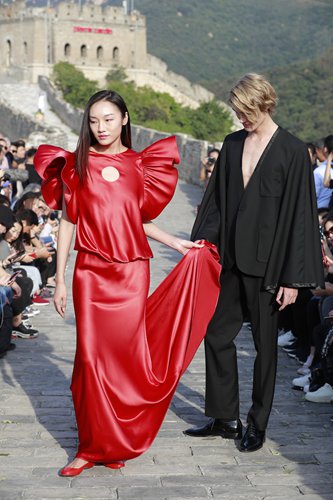 Models walk the Great Wall for the Pierre Cardin 2018 fashion show in Beijing on Thursday. Photo: Courtesy of Zhang Shuang

Nearly 40 years ago, French model Maryse Gaspard danced along the Great Wall dressed in a stunning gown during her first visit to China with Pierre Cardin.

A year earlier, in 1978, the French couturier became one of the first Western fashion brands to enter the Chinese mainland. The same year as Gaspard’s visit, Pierre Cardin also became the first foreign brand to hold a fashion show in the Chinese mainland after the country’s adoption of its reform and opening-up policy in 1978.

Now a manager for the brand’s women’s wear department, the 70-year-old Gaspard, still elegant and slim in an all-black suit, posed once again for the media on the Great Wall on Thursday after attending the Pierre Cardin 2018 show in Beijing earlier that day.

In addition to celebrating the brand’s 40th year in the mainland market, “the show is also dedicated to the 40th anniversary of China’s reform and opening-up,” Fang Fang, the brand’s chief representative in China and the event’s general supervisor, told media at a press conference after the show.

The fashion show took “Rouge de Cardin” as its theme.

“On the one hand, Rouge de Cardin is the brand’s symbolic color; on the other hand, the color red is often regarded as the representative color of China,” said Fang, explaining the meaning behind the theme.

Putting on display 40 classic collections from its Paris headquarters as well as 40 fashions from the 2019 Spring-Summer collection designed by Chinese designers, the show turned the 1,000-year-old meandering stone roads and battlements of the Badaling section of the Great Wall into a runway background.

The brand’s daywear collection included simple cut turquoise and dark green dresses and a series of men’s jackets made of space cotton and suede.

The highlight of the show was definitely the wedding dress collection, which showcased a layered dress worn by a ballerina who danced along the runway to late French composer Jules Massenet’s Meditation. Moreover, one of the wedding dress looks also featured an ivory white hat decoration inspired the Chinese conical bamboo hat, an element added by Cardin exclusively for the show.

Still one of China’s most recognized foreign fashion brands, Pierre Cardin established its bond with the Chinese fashion industry decades ago.

Pierre Cardin, the chief designer for whom the brand is named, first gained a name for himself among the Chinese public via a 1978 black-and-white photo that showed the then 56-year-old designer dressed in a lengthy overcoat and a scarf walking down a street in Beijing with his hands in his coat pockets as Chinese onlookers dressed in classic Mao suits stare at him with eyes full of curiosity.

In late 1970s, the concept of “fashion” was still kind of strange to many Chinese during a time when dark blue and army green Mao suits dominate mainstream daywear.

The runway show held by the French designer the very next year at Beijing’s Cultural Palace of Nationalities, the first fashion show run by a foreign brand after the reform and opening-up, was a blow to the country’s aesthetic system, according to an article from the Beijing Digest.

“On a temporarily-built runway, eight French and four Japanese models brought by Pierre Cardin moved their hips as they walked the catwalk to pop music tunes. These tall beauties with their relaxed facial expressions and clothing with shoulder pads drew a sharp contrast to the Chinese audience members dressed in blue and grey clothing that sat looking at them breathlessly from below the stage,” wrote the article.

Forty years after the 1979 show – a time when colorful clothing, stylish designs and international fashion brands are no longer strangers to Chinese people – the French brand is still remembered as a symbol of China’s fast-growing fashion industry.

“The Great Wall show is very special as we wanted to retrace the footprints of the brand and of Mr Cardin, who climbed the Great Wall for the first time 40 years ago during his first trip to China,” said Fang.

“Hopefully the brand will continue to impact China’s aesthetic trends.”