In celebration of the 40th anniversary, a series of real stories from Chinese people have been gathered below, to reflect the positive changes brought by China’s reform and opening up over the past four decades.

The Pamirs: From kerosene lamps to electric lamps

In the hinterland of the Pamirs in northwest China’s Xinjiang Autonomous Region lies a base of the Chinese People’s Liberation Army, with no more than four hours of sunshine every day due to the two 5,000-meter snow mountains on either side.

For many years, the frontier army had to write to their families and wait for the reply, which generally took several months to arrive. It’s hard to imagine that kerosene lamps were the main lighting tools there and their only entertainment was a game of poker.

Things have dramatically changed since China’s reform and opening up. From the fixed-line phone to smartphone, and from voice call to video call, fast developing communications technologies have made keeping in touch with families a more accessible and more frequent thing, waving goodbye to traditional letter correspondence.

Technology has changed our lives and narrowed the distance between the camps and the outside world, said instructor Xing Wentao.

“I thought the border regions meant harsh living conditions without electricity and signal, but unexpectedly, modern technology has reached even these frontiers,” said Qu Yunlong, a soldier who just joined the army. 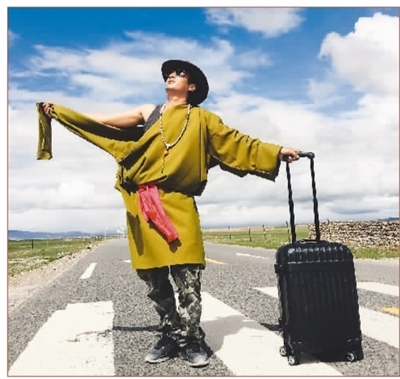 A 43-year-old Tibetan villager witnessed the last 40 years in Deqin County of southwest China’s Yunnan province first hand, saying that significant changes have taken place in all aspects of his daily life.

As he recalled, there was no technology in his village when he was young. The most advanced tool at that time was the loudspeaker in each household used for broadcasting daily notices.

A small hydropower plant supported the village’s electricity. The plant only worked from noon until 10 p.m. However, after the machine was sent away for maintenance for an extended period, the power station fell into disuse until electric wires were installed.

Now, modern televisions are no longer a scarce commodity for villagers, and broadband is available in every household.

Du Chunqiu comes from Shouguang in east China’s Shandong province, a city known as China’s vegetable capital. He has been a farmer for almost 30 years, planting a range of vegetables including peppers, chives, eggplants and cucumbers.

Cultivating vegetables used to be taxing in both time and water consumption, but with new breeding technology and scientific methods, the efficiency and quality of crop growing have been greatly enhanced.

Furthermore, farmers wearing masks are now impacted less when spraying pesticides, which are also less poisonous than before.