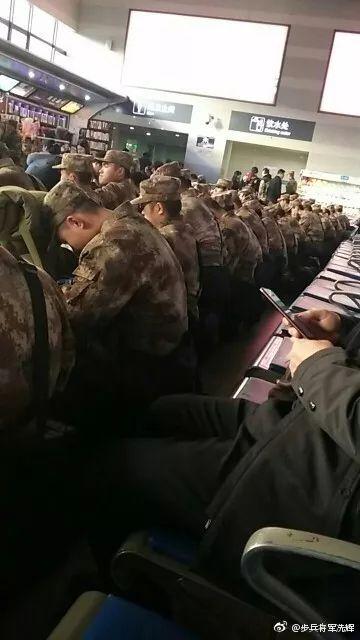 A viral photo has sparked a heated discussion among Chinese net users.

Taken on Dec. 20, the photo shows a company of People’s Liberation Army (PLA) offering seats to the people at a waiting hall of Beijing West Railway Station.

According to the photographer, after the officer of the PLA unit ordered the soldiers to vacate their seats for the people, the servicemen moved away from the seats and sat on their beddings between two rows of seats.

In addition, they cleared all the garbage around them before departure, the photographer added.

The warming scene has sparked a heated discussion. Many people shared their own touching stories related with Chinese soldiers.

A netizen said that he once saw hundreds of retired soldiers waiting for a train in Liuzhou, Guangxi Zhuang Autonomous Region. They placed their luggage neatly and waited for departure sitting on the ground. It made him realize that instead of vacating the seats for the people, the soldiers had no intention to sit on the benches.

“Serviceman First” signs can be observed almost everywhere in China. But the soldiers only take defending the nation and saving lives as first, leaving the priority of convenience to the people.