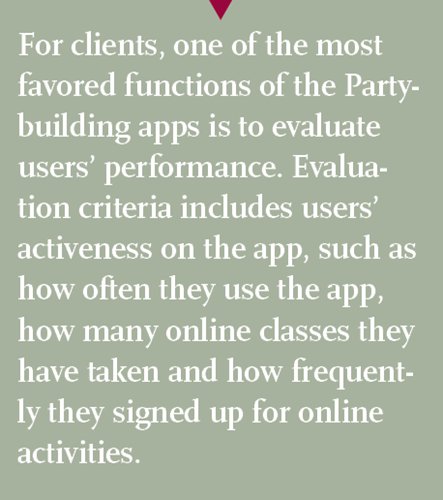 Screen grabs show various smartphone applications for Party building (center), a quiz of knowledge about the Long March (left) and a game of shaking the phone to learn the Party constitution (right).

Every morning, civil servant Sui signs in to her smartphone, not to chat with friends but to report on an app.

She also learns a variety of knowledge about the Communist Party of China (CPC) on this app, developed specially to manage and train Party members around the country.

In addition to the local government in Hunan Province Sui is working for, an increasing number of Party-related organs are using mobile phone apps to monitor and evaluate the performance of Party members, and service providers say momentum is high with the approaching Party congress.

The apps not only provide online classes to learn Party doctrines, but also enable users to pay their CPC membership fees or socialize with each other. More importantly, the apps will help the CPC evaluate the performance of their nearly 90 million members in a visible, traceable and interactive manner.

The most basic function of these new apps is to provide materials for members to learn the Party constitution and its regulations, as well as to help Party members follow news about senior Party officials, app designers told the Global Times.

Among such materials, speeches from Chinese President Xi Jinping, who is also General Secretary of the CPC Central Committee, are the most popular.

Quizzes on Party building apps. Single choice: A Party member ( ) participate and defend himself when a Party organization discusses his punishment or assessment and other Party members defend him. A(has the right to) B(must) C(has no right to) D(cannot)

For clients, one of the most favored functions of the Party-building apps is to evaluate users’ performance. Evaluation criteria includes users’ activeness on the app, such as how often they use the app, how many online classes they have taken and how frequently they signed up for online activities.

Whether Party members are learning the lessons in a timely and active manner can also be displayed on the apps, offering traceable evidence of their usage, Zeng Ying, a project director at the Fujian Huayu Education Technology Co, told the Global Times.

The project, named “China’s Good Party Member,” has developed more than 100 such apps for clients, with 8 million, or nearly 10 percent of all Party members in China, as its user base.

Some apps also provide tests on Party-related knowledge, such as “How Party members should act to avoid an unwanted work style?” The test results affect the evaluation of the user on the app, and also in reality.

An app designed for the China Tiesiju Civil Engineering Group Co (CTCE) ranks its users on a monthly and weekly basis according to users’ learning habits and test results, Wang Shizhou, head of the organizing department at the CTCE, told the Global Times.

Those who fail, or perform poorly, on the tests will be criticized; good test result will earn users points which will earn them a higher ranking or can be used to exchange for rewards such as notebook or pens, said Wang.

A new version of the app is expected to enable users to vote for the company’s annual “Top 10 Best Party Members” among nearly 10,000 candidates, said Wang.

For companies like CTCE, whose staffers are mostly working at construction sites across China, it’s hard and costly to gather all employees at one site for a training or poll. “An app can effectively actualize that goal,” said Wang.

Such effectiveness has been hailed by Wang Tong, deputy head of the Party committee of the People’s Publishing House, which developed a popular app called “Party Member’s Schoolbag.”

The app has been used in remote areas, such as the Ngari Prefecture in Southwest China’s Tibet Autonomous Region, in order to make it easier for the region’s Party members, who are scattered across the Qinghai-Tibetan Plateau, to learn or hold conferences online, said Wang Tong.

“Party Member’s Schoolbag” is currently being used by 1,244 client organs, including the State Administration of Press, Publication, Radio, Film and Television, and also the CPC committee in Yan’an, Northwest China’s Shaanxi Province.

Unsurprisingly, Party-building apps have been designed mostly in the color red, with logos usually designed in classic styles such as the “sickle and hammer” of the official Party flag. The apps are designed in a way to facilitate the actual work of Party members, as a majority of them are local government officials.

For instance, an app designed by the CPC committee in Laizhou, East China’s Shandong Province, introduces local agriculture specialties and tourist sites together with detailed contact information. The app aims to help Laizhou, where 70 percent of its 60,000 Party members are farmers, improve their local economy, according to Zeng.

Such apps, which require tens of thousands to several million yuan to develop and maintain, are mostly designed for CPC committees at different levels and for Party organizations at social units, such as companies or universities.

According to service providers, most of the apps are only available to download and use among members belonging to the same Party organization. Though a few Party-building apps are available from retail app stores, non Party-members may only log in as visitors to experience limited functions.

Many members-only apps also provide a channel for users to socialize with each other using functions similar to WeChat. They can search and “friend” other nearby Party members and organize online or offline activities via the apps.

With the approaching 19th National Party Congress, the need for such apps has rapidly increased along with people’s awareness of the significance of the meeting, according to Zeng.

As no members would like to be seen lagging behind in their Party-related work, such apps also place additional pressure on members to properly and timely show their loyalty and enthusiasm for the Party, Su Wei, a professor at the Chongqing Municipal Party Committee’s Party School, told the Global Times.

Though the effectiveness and convenience of such apps has been highly praised by developers and buyers alike, for Party members, the actual user experience of Party-building apps has received mixed feedback.

“It makes me feel motivated to spend more time and effort studying Party-related knowledge, as it gets shown in the app,” said Chen Lixia, a Party member from Central China’s Henan Province.

However, others are complaining that the apps, which are mandatory for Party members to download and use, are a burden for already overloaded members.

Functions such as paying membership fees reportedly do not always work properly or only support limited options to pay, while the activeness of users on the app is not always accurate, according to some Party members contacted by the Global Times.

“A user can simply pay someone else to get a better record of using the apps and answers to tests can be easily found online,” said Party member Sui.

“Using the Internet and big data to help with Party building is a trend and it brings more convenience for the management of local Party committees. However, it’s not a competition. The apps should avoid derailing from the purpose of Party building,” said Su.

By the end of 2016, China had a total of 89.44 million CPC members managed by 4.5 million Party grass-roots organizations. The country’s ruling party has put a premium on monitoring the work performance of its members.