A child plants a sapling under the help of his parents at a park in Lianyungang, eastern China’s Jiangsu province, Mar. 3, 2019. (Photo by Si Wei, People’s Daily Online)

More and more Chinese citizens are contributing to China’s forestation efforts with the help of online platforms, as the country hastens its steps to green its land and seek environment-friendly development.

Different from previous years, when the tree planters had to register and pay for saplings in person at designated spots after got information from radio, television and newspapers, the voluntary planters now can register and get saplings free-of-charge via online channels like website and social media platforms.

The certificate of honor for voluntary tree planting has also transferred to electronic version from hard copy.

The convenient and professional online platforms have given a boost to the citizens’ aspiration to plant a tree. In 2018, over 50,000 residents in the city registered to be a planter via online platforms, the highest in history.

After the municipal government published this year’s planting plan on Feb. 22, the saplings soon ran out of quota due to the passion of the citizens. According to the arrangement, 21 spots in 15 districts were designated as planting areas. 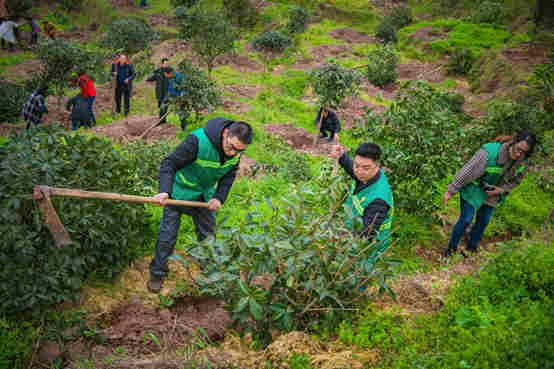 “Over 100 saplings were claimed in just seconds”, said citizen Wei Wenfang, adding that it was lucky for her son to have successfully claimed one.

Wei said that she was motivated by a piece of TV advertisement on voluntary tree planting in 1999, and her family’s tree planting tradition has lasted for 20 years.

She still kept several old photos of her family in front of a platanus orientalis sapling they planted 20 years ago, when her son Wu Jiahao was only 5 years old. The little boy has grown up, and the sapling is now a tall tree towering by the street.

Wuhan is not the first Chinese city to green land with help of online platforms. After China launched an internet platform of voluntary tree planting, 10 provinces, autonomous regions and municipalities including Beijing, Inner Mongolia, Anhui, Shaanxi and Hubei have started pilot programs under the “Internet Plus” drive by opening their respective online platforms.

Online registration for tree planting also offers a solution to address the challenges faced by large-scale campaigns, which usually cost a lot but ended with low survival rate since most of them took place in areas far from the cities due to the reduction of urban land.

Ecological progress has been made one of the integral components of the development strategy for socialism with Chinese characteristics together with economic, political, cultural, and social progress since the 18th Communist Party of China (CPC) National Congress in 2012. 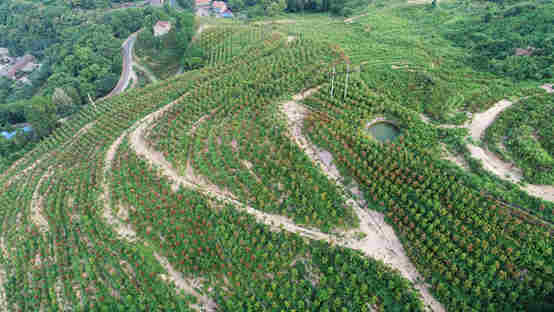 Photo taken on Aug. 28, 2018 shows blossoming crape myrtles and maples dressing up a hill at Yueliangpo village, Huaying, southwest China’s Sichuan province. The city has made huge efforts to green its landscape and finally recovered its hills with forests, bringing a turnaround to its desertification. (Photo by You Qing, People’s Daily Online )

The CPC is the first political party, especially ruling party in the world to include ecological progress in its guideline. China has become an important participant, contributor, and torchbearer in the global endeavor for ecological civilization.

According to data collected by the National Aeronautics and Space Administration of the US, since the turn of the new millennium to 2017, the earth’s green leaf area increased by 5 percent, which was equivalent to the area of the Amazon rainforests.

China was the source of over a quarter of the increase in green leaf area, ranking the first in the world, the statistics indicated.