The next day, the first 12 Jiefang cars rolled out the production line, marking the beginning of China’s automobile industry.

As the first generation of the Jiefang series, the CA10 truck was designed with Chinese characters “Jie Fang” on each vehicle nose.

When the production was suspended in 1986, 1,281,502 Jiefang cars had been manufactured. The number was almost half of the national total production during that period.

“Back then, one of every two cars on the street would be a Jiefang vehicle,” a former employee recalled.

In preparation for the first car, FAW produced 2,335 automobile parts and designed more than 100,000 non-standard blueprints.

“Before our own cars were produced, we only drove foreign vehicles. It was difficult to change gear. But Jiefang cars don’t have such problems,” said Yu Fengmian, who drove the first 12 Jiefang cars when they rolled off the assembly line. 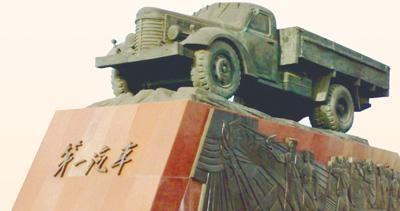 Yu thinks the Jiefang car was designed to fit the driving habits of Chinese drivers, and that’s why it survived the market for a long time.

By Nov. 30, 2018, 7 million Jiefang cars had been produced. Jiefang vehicles have been exported to more than 80 countries and regions.

The Jiefang brand initiated the development of a national automobile industry and Chinese brand. In modern society, it is still taking the lead in intelligent car production.