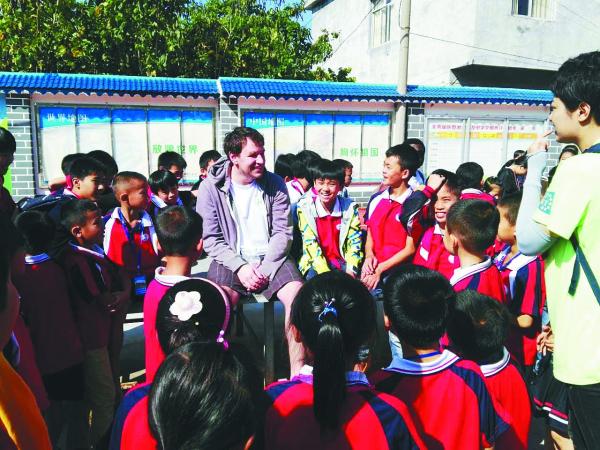 Grandnephew of noted Canadian communist Norman Bethune who offered remarkable medical assistance to China during the War of Resistance against Japan has come to China to learn Chinese, Chinese newspaper Shenghuo reported Thursday.

Now the descendant of the heroic anti-Fascist fighter, Mark Bethune, is studying at Harbin Institute of Technology (HIT) in northeastern China’s Heilongjiang province.

Mark hopes the language will serve as a bridge so he can start a new journey in China in tribute to his granduncle.

Mark was granted a souvenir medal commemorating the 70th Anniversary of the defeat of fascist forces on behalf of Norman in Beijing in September 2015.

During his stay in Beijing, a simple conversation with a local taxi driver who mentioned Norman inspired him to study Chinese. “I was deeply moved by the Chinese who are in deep remembrance of Norman,” Mark said.

So far, Mark has been studying at HIT for eight months. “I like Harbin very much, and I enjoy my life here,” he said.

When speaking of the worldwide frenzy of Chinese learning, Mark noted that China, with a rapid development, is becoming more and more influential in the world. According to him, it is a common aspiration for many foreign students to speak fluent Chinese.

Mark said that China has 300 million young people, which is equal to the total population of the United States. How to pass on the spirit of Norman Bethune to the young generation of this country has long been a major concern for him. “I think it will be better for me to tell his stories in Chinese,” he said.

Mark hopes to enlarge his social circle at HIT so that he can have a better understanding of China in the new era. Currently, he is working on a screenplay about his granduncle, hoping to introduce Norman’s spirit to the world.