Nobody would have imagined that niche cultures, such as Han costumes, Lolita fashion and JK uniforms are in fact now favored by far more than a few minor groups on the sidelines, instead propping up a market of around 10 billion yuan ($1.55 billion) today.

In fact, online searches for Han costumes exceed those of T-shirts on e-commerce shopping platforms, and a single JK dress may garner a sales volume of 300,000 units within several days after its initial launch. 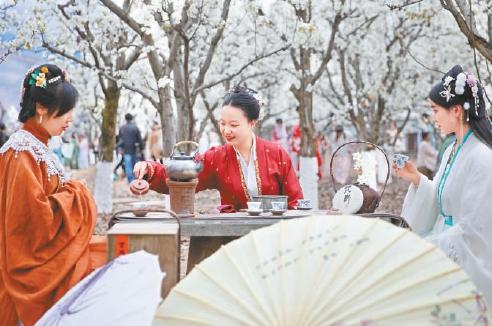 “In the past, the number of fans for these cultures and fashions was very limited. However, about two years ago, I began to receive inquiries from a vast number of neophytes,” said Fu Linying, a fan of these types of distinctive clothes and also a vendor of JK uniforms on the online Chinese e-commerce marketplace Taobao.

That was why Fu, who had been studying and working overseas, decided to return to China and start a JK uniform business with her boyfriend in 2019. According to Fu, people aged 17 to 28 are the main target consumers for her online shop.

Last year, Fu rolled out a JK dress design whose color differed from that of ordinary ones. Within a couple of days, over 20,000 units of the dress were sold.

“Most of the girls in my time could only follow trends, but the young girls today have become trend settlers,” Fu said.

Last year, Fu’s store achieved a sales revenue of over 2 million yuan, with the number of followers linking to her store rising to nearly 200,000.

Consumers of these kinds of unique clothing items will usually select and shop for items at one or several stores, and then share their comments and personal feelings about the dresses they purchase from individual stores on the platforms.

“A Lolita outfit costs somewhere between 1,000 yuan to 2,500 yuan,” said Mu Mu, a college student who has a passionate interest in Lolita outfits, adding that she spends over 10,000 yuan on Lolita costumes every year.

She said that Lolita costume fans respect and prefer original designs and will shun any knockoffs, which is why they have become increasingly more loyal to specific brands.

Taobao now has over 1,000 stores like Fu’s. The constant expansion of China’s emerging consumer demand has provided merchants in the niche market with significant room for continued growth. Data from Taobao showed that the number of new active merchants on the platform hit its peak during the period from April 2020 to March 2021 over the past five fiscal years since 2017.