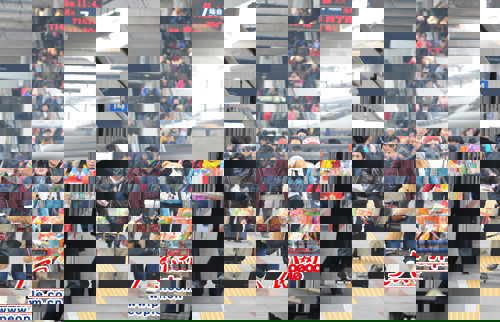 As the transportation capacity of China’s railway systems has been further improved this year, more Chinese people will be able to enjoy comfortable trips back home during the approaching Spring Festival travel rush, according to a big data report issued by Chinese internet security firm Qihoo 360 on Dec. 20.

Facilitated by China’s enhanced rail way capacity, over half of the passengers can get home within 12 hours, and those who must spend more than 24 hours to return home by train only account for 11 percent.

Guangdong Provincial Development and Reform Commission told the Beijing Morning Post that by 2020, bullet train services will cover 21 cities in the province. As a province well-known for massive amounts of passengers during the Spring Festival, see a huge relief in its traffic pressure will be seen during this period.

The report predicted that Guangdong, Shanghai, Beijing, and Zhejiang will still be the largest sources of outflow traffic during this year’s Spring Festival travel rush, with Hunan, Hubei, Heinan, and Sichuan provinces being the largest destinations.

It is noteworthy that Hangzhou, Zhejiang has witnessed a surge in the number of outflow passengers, indicating that it has risen as a new attraction for China’s floating population.

Over 90 percent of the hottest 10 routes during the travel rush will be in southern China, and emerging first-tier cities such as Chengdu, Wuhan and Chongqing have also become major transportation hubs, the report said.

The difficulty of acquiring a ticket for returning home during this period has always challenged the “returning army”. Qihoo 360 launched an online system for ticket booking based on cloud computing and its security techniques in order to alleviate the situation.

Users can pay in advance to acquire a ticket, and the system will offer full refunds should a given user fail to fully confirm the tickets. In addition, it will automatically allocate canceled or extra train tickets to the buyers by means of smart analysis techniques, said Wang Qian, chief designer of the cloud service.