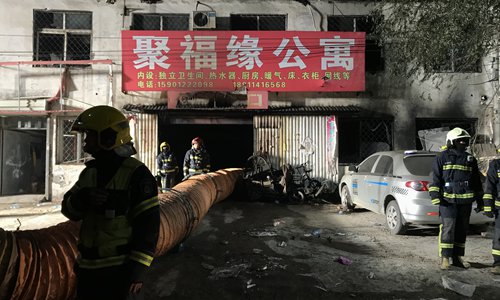 Beijing authorities on Sunday denied there is a systematic campaign to evict migrant workers from the metropolis, after an ongoing city-wide campaign against unsafe buildings sparked huge criticism.

The Beijing Administration of Work Safety responded to their critics by denying there is any targeting of the “low-end population,” in reference to migrant workers, media reported Sunday.

“It is irresponsible and groundless to say the campaign is to evict the ‘low-end population.’ There is no such phrase,” an official from the administration, who refused to give his name, told the Beijing Youth Daily.

Beijing launched a 40-day safety inspection campaign after a deadly fire on November 18 that killed 19 people, including 8 minors, in an apartment block in Xinjian village, Daxing district. The campaign will last until the end of December.

Xinjian was all but deserted when the Global Times arrived Friday morning, as residents hurried to leave before a local government deadline to vacate illegal buildings by Friday night.

Illegal buildings, as well as places that are simultaneously used for housing, storage and production are among the places with a high frequency of safety violations, according to a document from the Beijing Municipal Commission of Housing and Urban-Rural Development. The inspection covers all districts in Beijing, with the focus on the rural-urban fringes, it said.

Like migrant workers from other places affected by the safety inspections, the residents of Xinjian told the Global Times they were either returning to their hometowns, or trying to find a new home in the capital or other nearby places, such as Langfang in Hebei Province.

Individuals and organizations, including hostels, real-estate companies, NGOs, churches and restaurants have reached out by offering free accommodation, transportation or work opportunities to people who lost their homes and jobs.

Wang, an employee from a real-estate company in Gu’an county, Hebei Province, which is close to Beijing’s Daxing disctrict, told the Global Times that his company offered more than 20 apartments for the homeless free of charge for up to three months.

“Before those spare houses are sold, they are available for the people in need. Bunk beds and toilets have been arranged,” Wang said Sunday.

Some organizations arranged free minivans for migrants to help them move or send them to train stations. A platform called Caibang technology dispatched about 10 vans to help people in need on Saturday.

However, a man surnamed Yang who posted information and volunteered to offer places for migrants in Tongzhou district on Saturday, was told by local police to stop providing services and shut his house down.

“Police told me I need to be certified to house migrants and offer services for them,” Yang told the Global Times on Sunday.