Yu Wenwu, a resident in the Weixi Lisu Autonomous County, southwest China’s Yunnan province, has made endeavors to protect the black snub-nosed monkey, referred to as the Yunnan golden hair monkey by locals, at the Baima Snow Mountain Nature Reserve. 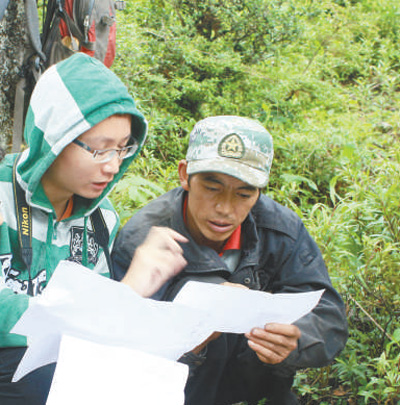 Since 2011, Yu has fed the monkeys on complementary food mainly consisting of Chinese usnea and cabbage in the morning, pumpkin seeds and peanuts in the afternoon, so that they could become healthier and stronger under the care of the staff members at the nature reserve.

“I need to feed them in various places to suit their habits of foraging and try to distribute the food in case the animals get into fights for it,” Yu said.

Along with feeding the monkeys, Yu also needs to collect and test the feces of the animals in order to keep track of their physical conditions and provide proper treatment if necessary. Female monkeys usually conceive every two years, which is not an easy thing for the endangered species, but with the efforts of Yu and other workers there has been an increase in births.

The number of Yunnan snub-nosed monkeys in the Weixi Lisu Autonomous County under the nature reserve has risen to over 1,300 from about 300 or 400 at the very beginning, Yu pointed out.

While protecting the species, Yu has also received steady income from the work.

According to Yu, with a monthly income of 1,700 yuan for taking care of the monkeys and an annual subsidy of 9,000 yuan for protecting the forest, he is able to lift his family out of poverty.