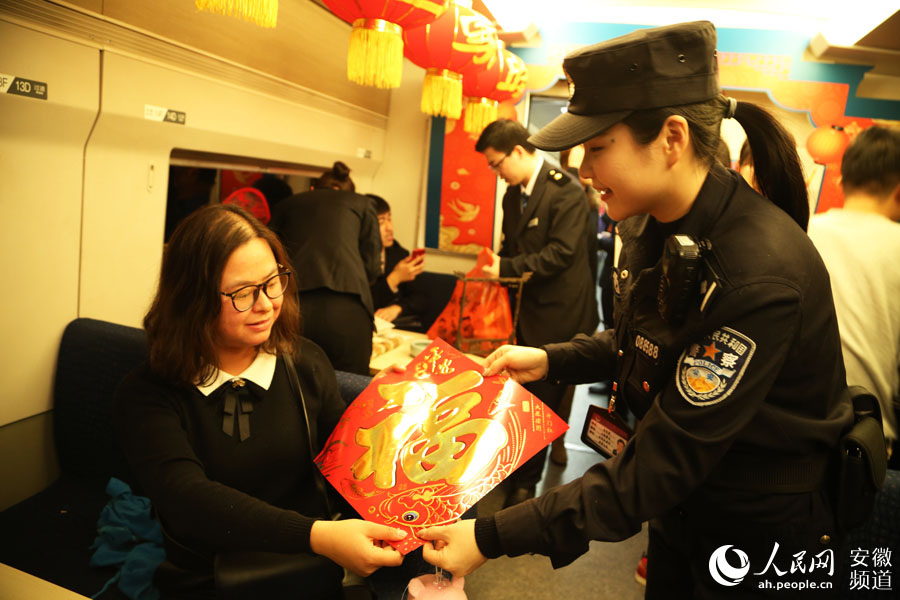 Jan. 28 marked this year’s Little New Year, or Xiao Nian in Chinese, which is a traditional festival when people across China tend to clean the house, worship the Kitchen God, and start shopping for the Chinese Lunar New Year, also known as the Spring Festival.

Railway attendants performed tea art, Huangmei Opera, a local style of opera in Anhui, and asked passengers to taste some famous local Hui culture tea brands. Hui culture is one of three major regional cultures in China, which was born in China’s ancient Huizhou area, and is now included in Anhui Province and Zhejiang Province.

During the gala, passengers were also invited to take part in a general knowledge quiz about the Hangzhou-Huangshan high-speed train and Spring Festival travel rush.

“It’s great to bring happiness to passengers on Little New Year,” said the tea art performer Jing Jing, who disclosed that she had learned tea art from a professional two months before the gala.

Cheng Jinxia, the railway attendant who performed Huangmei Opera during the event, told People’s Daily that she hoped to bring this style of opera to more people through this gala.

Passengers on the train applauded the performances. A passenger named Lu Fen said, “It has been a pleasant surprise to enjoy the festive air created by the talented railway attendants on my journey home.”