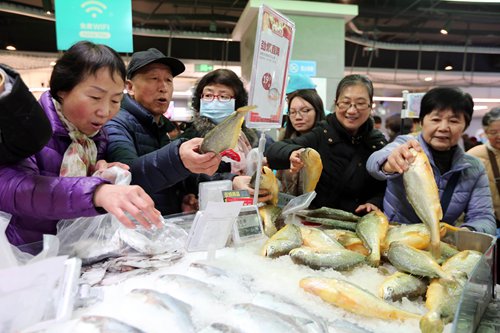 Seafood from India and Pakistan is gaining in popularity in China, not only because of its low prices, but also because of support from government policies.

China’s imports of fish, crustaceans and aquatic invertebrates from India reached $118 million in 2017, up 28.8 percent on a yearly basis, according to data obtained by the Global Times from a source who declined to be named.

In comparison, China’s overall imports of aquatic products reached $5.096 billion in the first half of 2017, according to media reports. Updated statistics have not yet been disclosed.

A report from the UK-based undercurrentnews.com in December 2016 said that China had overtaken the EU and Japan at that point to become the largest seafood export market for Pakistan. The Embassy of Pakistan in China didn’t respond to an interview request from the Global Times as of press time.

Several seafood distributors the Global Times talked to said that Indian Ocean seafood, compared with seafood imported from other sources, is more cost-effective.

One distributor surnamed Jiang who works for Fuzhou-based Fugeng Agriculture Corp said that Indian Ocean seafood is relatively cheap due to the low local labor costs. “For example, unprocessed cuttlefish from India costs about 25,000 yuan per ton, compared with about 35,000 yuan per ton from Spain,” Jiang told the Global Times on Thursday.

Another seafood distributor surnamed Guo, who works at the Shanghai-based Hua En Seafood, said that his company specialized in selling frozen whole raw lobsters imported from India. Hua En has imported about 350 tons of raw lobsters from India annually in recent years, Guo told the Global Times on Sunday, adding that domestic market demand for Indian lobsters has risen slightly.

Jiang said that Indian Ocean seafood is still considered “low-end” in some parts of China, as the countries do not have adequate methods to keep it fresh during the transportation process.

In recent years, the Chinese government has rolled out measures that have encouraged and facilitated imports of seafood from India and Pakistan.

One example is the establishment of the China-Pakistan Economic Corridor, a flagship project of the Belt and Road initiative, which has enriched the transportation channels for Pakistani seafood to enter China.

According to Chen, in the past Pakistani seafood could enter China only via sea or air transport. But after the corridor was set up, his company started importing Pakistani seafood by land transportation via Pakistan’s Gwadar Port as well as via Northwest China’s Xinjiang Uyghur Autonomous Region.

“Pakistani seafood needs to travel only for three days via land transportation to China, compared with 40 days by sea, so the cash conversion cycle can be much shorter,” Chen said, adding that the seafood will be sold in northwestern and southwestern regions in China.

Chen also said that with the large demand for seafood in those regions, as well as the lower transportation costs, more companies will engage in seafood trade with Pakistan. “The business has a promising future,” he said.

Apart from transportation, the government has also lowered import tariffs on many types of seafood such as frozen crabs and shrimps, starting from December 2017.