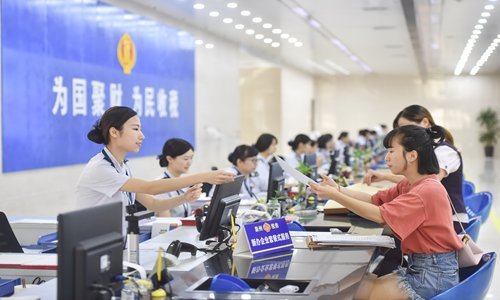 Under the scheme, an average of 1,026 yuan per capita in tax was cut for Chinese people in Q1, according to statistics from the State Administration of Taxation (SAT).

Statistics in Q1 indicate that taxpayers aged from 36 to 50 years old benefited most from the additional deductions, said Cai Zili, an officer with SAT.

“Education, housing and elderly support are the major expenses for middle-aged people. The more they spend on these items, the more tax cuts they will get,” said Wang Yanming, director of the municipal taxation bureau of Weifang, east China’s Shandong province.

From January to April, personal income tax cuts for people aged between 31 and 50 years old accounted for 67 percent of Weifang’s total tax cuts in this area.

Li Xuhong, an expert on finance and taxation from the Beijing National Accounting Institute, pointed out that the individual income tax reform could not only lessen the tax burden for those on lower incomes, but also stimulate consumption.

Yang Wenjuan, a technician from Shengrui Transmission Corporation, who is studying postgraduate courses at Tianjin University while working, said with the new deduction on expenses for further education, she received a monthly tax cut of 400 yuan.

The individual income tax reform is also expected to increase consumer spending by 717.6 billion yuan, according to a report released by Peking University’s China Center for Economic Research.