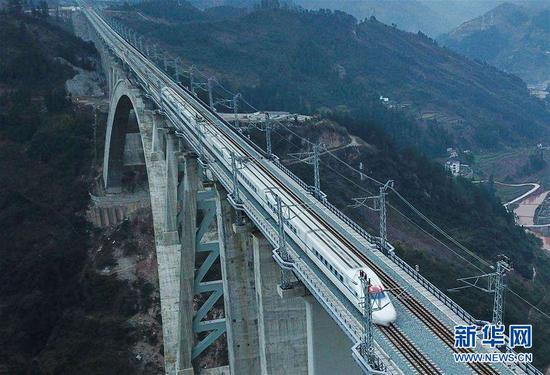 China is home to 29,000 kilometers of high-speed railway, which has created comfort and convenience for a huge number of passengers.

However, have you ever wondered why most high-speed railway tracks are built on bridges?

Su Wei, the chief engineer of the bridge department under China Railway Design Corporation, recently explained the country’s preference for bridges during the construction of high-speed rail in an interview with Economic Daily.

Bridges have a considerable advantage in the fact that they occupy much less ground space than subgrade engineering, Su said, adding that China constructed substantial bridges for high-speed rail in the plains to replace subgrade projects – a standard method in common railway lines.

According to Su, bridges are vital in developed regions that are densely populated, as they can save 2.9 hectares of land per kilometer extended.

Additionally, high-speed rail has a high standard for operational conditions, so they must bypass immovable barriers such as buildings. By building bridges, the railway can avoid such areas and lower the space division of cities.

“Now, bridges are often pre-engineered and prefabricated in factories and then transported to construction sites, which helps achieve better quality control and reduces the construction period,” Su noted.