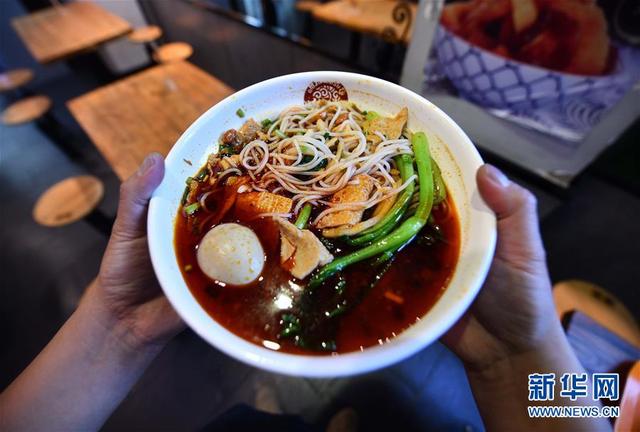 Known as “luosifen” in Chinese, the dish is usually sold from roadside stands in night markets in Guangxi.

The delicacy was listed as part of Liuzhou’s intangible cultural heritage in 2008 and became popular after being recommended in the hit food show “A Bite of China” in 2012. Since then, luosifen restaurants have developed rapidly across the country.

The specialty has gained greater popularity thanks to its prepackaged versions, which resembles instant noodles.

Data from e-commerce giant Taobao showed that 28.4 million packets of luosifen were sold on the platform last year, becoming the most popular snack on the online marketplace.

According to the commerce office in Liuzhou, the value of prepackaged luosifen reached about 5 billion yuan (over $700 million) in the first half of the year.

It was also one of the best-selling, ready-to-serve foods during the novel coronavirus epidemic in China.

The dish has seen its popularity soar further outside of China as customs statistics showed that a total of around 7.5 million yuan (about $1.1 million) worth of luosifen were exported from Liuzhou from January to June this year, eight times the total export value in 2019.

In addition to the traditional export markets, including the U.S., Australia and some European countries, shipments of the iconic dish have also been delivered to new markets such as Singapore and New Zealand.

On July 14, over 14,000 packets of prepackaged luosifen produced by Guangxi Luobawang Food Co., Ltd. were exported to Russia.

“We almost exported our products to the U.S. each week this year, and a batch of 40,000 packets of luosifen sold out just three days after they were shipped in the country,” said Chen Zihao, a member of the company.

The company is expected to export 350,000 packets of the sought after food in the first half of the year, 29 times of last year’s total, thanks to the rapid growth of the overseas market, Chen noted.

The company has also modified the recipes to cater to the taste of overseas foodies, Chen said, adding that it has received orders from countries including Japan, South Korea and Italy.

Liuzhou Customs has simplified procedures for companies to export luosifen, and more than 20 companies have been authorized to export the specialty.