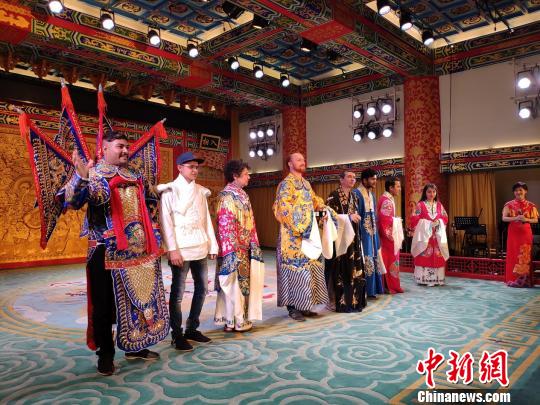 Hunan Library, the provincial library of central China’s Hunan province, held a Beijing Opera training class for foreigners in Changsha, the capital of the province on June 23, Chinanews.com reported.

More than 120 international students and teachers from over 60 countries took part in the activity.

At the beginning of the course, Ge Qianqian, deputy director of the Peking Opera Protection and Inheritance Center of Hunan, introduced the origin of Peking Opera, and the roles and designs used in the opera.

The foreigners were invited on stage to try the unique costumes and make-up of Peking Opera. Sagada, a Pakistani graduate student in Central South University, said the teachers drew red patterns on his face. The characters usually wear red make-up in memory of Guan Yu, a loyal and brave general with a reddish face who lived during the Three Kingdoms period. “I have never seen such wonderful performances. What impressed me most was Sun Wukong (the Monkey King). The actor wielded the Monkey King’s weapon Jingu Bang very skillfully,” said Sagada.

Nataliia from the UK, who is a teacher at a training institute in Yueyang, finds traditional Chinese culture fascinating. During the two-hour course, she learned the basic hand gestures and styles of walking in Peking Opera. She believes learning general knowledge about Peking Opera has enhanced her understanding of the performance.