Jin Yuepin is more than just a chef. He is also the chairman of an ecological agriculture development company in east China’s Zhejiang province pioneering a unique method of farming. 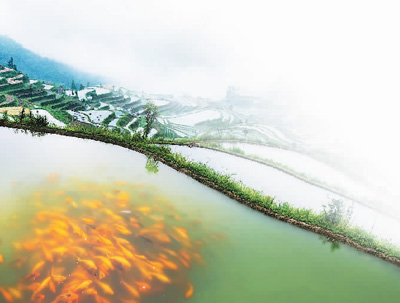 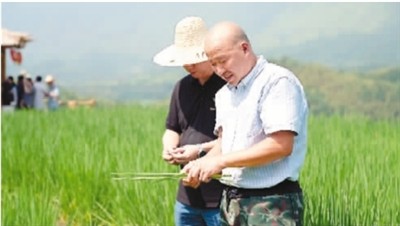 After living in France for 29 years, he has come back to China and has been awarded the title of “Model Farmer” by the Food and Agriculture Organization of the United Nations.

In February 2007, Jin came back with his parents to visit their relatives in China during the Spring Festival. When Jin saw the farmland in his hometown and the fish swimming in the pond, he felt a strong sense of nostalgia and the impulse to come back to China after living in France for 29 years.

At that time, the rice-fish farming system in Qingtian, Jin’s hometown, had just been designated by the Food and Agriculture Organization of the United Nations as one of the first batch of Globally Important Agricultural Heritages in the world. This further prompted him to make up his mind to return to his hometown and start a business raising fish in rice field waters.

Just half a year later, Jin took care of his foreign assets and returned to his hometown.

“At that time, it was easy for me to earn millions of yuan a year in France,” Jin recalled, adding that most of his relatives and friends could not understand his decision to go back to his hometown.

Thanks to his many years of entrepreneurial experience abroad, Jin was aware of the need to “manufacture products with their own brands and trademarks”. While others hesitated, he started thinking about how to start a brand for “raising fish in rice field waters”.

“At first, I rented 50 mu (about 3.3 hectares) of rice fields and built a base to raise fish,” Jin said, noting that at the time, fish were traditionally bought at a high price from local farmers and spawned. Although many fish did spawn, few survived.

He consulted several people, but was unable to find a solution. In order to master the skill of raising fish, he made a special trip to a university in Shanghai to learn how to cultivate and spawn fish fry.

After half a year of study, he finally mastered the skill of raising fish in rice field waters. The survival rate of his fish fry began to increase year by year, and Jin became a fish culture expert in the village.

In 2010, Jin organized a rice-fish farmers’ cooperative, established a 2,000-square-meter fish breeding base and contracted more than 400 mu of rice fields from villagers to set up a rice-fish farming base.

Thanks to his efforts, more than 80 members of the cooperative have made profits from the rice fields, with each reaping a per capita net income of over 15,000 yuan ($2,196).

He also registered trademarks for the products and helped to win national certification for both the rice and the fish as “green food” in recognition of its natural qualities and environmental value.

In 2014, Jin was awarded the title of “Model Farmer” by the Food and Agriculture Organization for his contribution to meeting the requirements of consumers for product quality and safety, increasing farmers’ incomes, protecting the agricultural ecological environment, and optimizing the agricultural industrial structure.

As for his future plans, Jin said that he is preparing to apply for quality certification for dried fish, and plans to build an experimental base for middle school students, and create one-stop services for experiments, sightseeing, and farm music. At the same time, he will also help with efforts to sell agricultural products from his hometown overseas.