Impressed by his skills and enthusiasm for football, netizens who have watched videos of him practicing have left many encouraging comments below the videos, including “I’m looking forward to seeing you become a member of the national team,” “A future football star,” and “A nation will be strong when its young people are strong. You are the hope of the Chinese men’s national football team.”

Chen idolizes Argentine football star Lionel Messi. When asked about his dreams, he said without hesitation, “I want to become China’s Messi.”

According to his father Chen Hexing, the boy has been fascinated by football since he was four. “When he was little, I often took him to watch his brother play at his football games. Although he had just learned to walk, he acted as if he wanted to be a part of the games too. In his second year of kindergarten, he finally got to take part in football games himself,” Chen Hexing said.

Since his first football game in kindergarten, Chen’s interest in the sport has grown increasingly strong with each passing day. He often plays football with his classmates at school and learns football skills from his brother or practices basic skills by himself after school, the father said.

“All he does after school is his homework and practice football. Other children may watch cartoons after school, but he doesn’t have time to do that at all. He practices football at school after the day’s classes are over, and sometimes it’s already 9:30 p.m. when he gets home,” he said.

The family runs a computer store, and the passage behind the store has been where the boy polishes his football skills, according to Chen Hexing, who disclosed that he is often too busy to watch his son practice every day, so he installed a camera in the place to supervise his practice.

“Sometimes I let him watch inspirational sports movies like Pelé: Birth of a Legend to spur him on,” Chen said, adding that after watching such movies, the boy would often voluntarily start practicing early on the next morning. In an effort to better support his son’s interest, Chen has transformed the living room of his house into a small football field, so that his children can practice football whenever they want.

“Although small, it’s enough for them to practice basic skills,” he said.

Many netizens suggested sending the boy to a special football school, but Chen thinks he is too young to go to such a school, and in that case, his parents won’t be able to take good care of him.

As he tries to make sure his son gets enough practice to lay a solid foundation for the possibility of taking up a career as a football player, Chen knows the boy will have to make a choice between regular education and the path of becoming a professional football player. 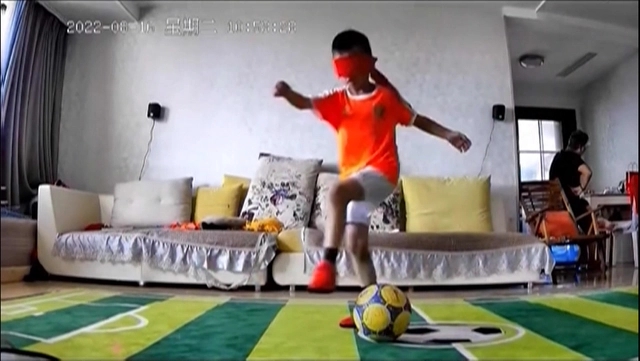 “Middle school will probably be a major watershed in his growth. We can see that fewer children play football after entering higher grades of elementary school. We don’t know the future, what we do know for sure is that studying and practicing football are the most important things for him now. No matter what will happen in the future, we think he should just keep practicing for now. He will make his own decision about his future path when it’s time to make a choice,” the father said.