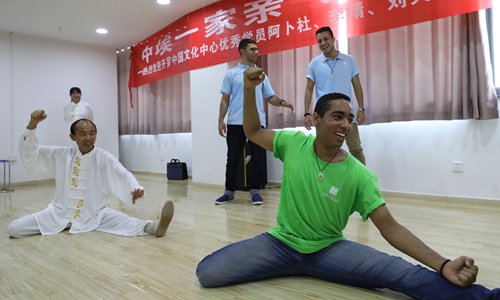 Prompted by their brother Abdullah Kamal, a famous Egyptian journalist who foresaw the rise of China as a global power, twin sisters Rasha and Shiamaa Kamal decided to study Chinese in the 1990s to better understand the rising economic powerhouse.

Now, they have become the building blocks of a bridge connecting the cultures of China and the Arab world, working as established translators and lecturers in the Chinese language.

“Since my first year in al-Allsun Language College in 1996, my sister and I had a clear objective of promoting knowledge, transferring and introducing as much information as we can about China into the Arab world,” Rasha Kamal, a 38-year-old professor of Chinese language at the Ain Shams University, told Xinhua.

Since 2011, Rasha has translated and edited 36 books about China, with subjects including China’s great economic progress, the Belt and Road initiative, the life of Deng Xiaoping, the chief architect of China’s reform and opening up policies, and a series of books about the Xinjiang Uygur Autonomous Region in northwestern China.

“I’m very keen on cooperating with China’s Ministry of Culture to define Chinese history, culture and civilization from the Chinese original perspective, not from the West’s mistaken understanding,” said Rasha, the younger sister.

Shiamaa, chair of the Chinese Department of the Badr Private University in Cairo, told Xinhua that Egyptians are now more eager to become involved in activities that deepen their knowledge of China’s success.

There are now 250 Egyptian students in the Chinese Department in al-Allsun, a sharp rise from 40 in 1995. Meanwhile, many private universities across Egypt have opened new departments recently to teach the Chinese language and literature.

The Kamal sisters said they have taken part in most of the cultural events in Arab countries related to China since their graduation in 2000.

“It’s our role as academic instructors and translators to erase the false perception about a country that had been conservative and closed for decades,” said Shiamaa, who recently attended a seminar in the United Arab Emirates on the Belt and Road initiative.

The initiative aims to build a trade and infrastructure network that connects Asia with Europe, Africa and the Middle East along the ancient trade routes, to seek common development and prosperity.

“China’s hands are now extended to the third-world countries based on mutual interests and cooperation rather than confrontation, with a focus on creating more opportunities,,” Rasha said.

After achieving an economic leap that has greatly impacted global politics, China has started to pay more attention to promoting its own culture.

China, which used to be a closed nation, has now become a society that is more open to other cultures, Rasha noted.

The Kamal sisters see the Belt and Road initiative as “a golden opportunity for enhancing cultural ties.” Rasha praised the initiative not only because it focuses on promoting partnership and cooperation with participants, which is totally different from the Western models, but also because it shows China’s determination to convince its partners to support it.

She noted that China, in promoting the Belt and Road initiative, has established research centers, held seminars and conferences, and translated related information into several languages.

Official statistics showed that Egyptian youths like to work in Chinese projects that are now spreading through the entire region, and to learn the Chinese language in order to work as tour guides.

Nearly 200,000 Chinese tourists visited Egypt in 2016, making China the fourth largest source of tourists for the country, in a major boost to an industry that had been suffering a slowdown due to political turmoil and terror attacks since 2011.

Accordingly, the two sisters believe Egypt and China should enhance coordination, not only between their culture ministries, but also between the two countries’ publishing and translation industries.

Besides attending several book fairs and seminars on China in the Middle East in 2017, Rasha has also traveled to many Arab and European countries to promote her books about China from the Chinese angle, in cooperation with Chinese writers, novelists and translators.

Rasha is now working on translating more books about China into Arabic.

“Our mission is not only translation, but to introduce Chinese culture to the Arab people,” Rasha said.