China’s home-grown brands incorporating Chinese traditional style and culture have become increasingly popular among young consumers, as these brands are not only known for their high-cost performance, but have become a leader in quality and trend. 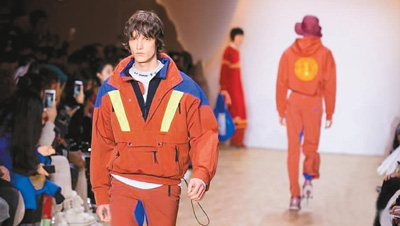 In the past, the brand has frequently collaborated with established brands, such as the potato chip brand Lay’s and Sesame Street, drawing a great deal of attention on social media.

While many young Chinese thought the brand’s clothes were too formal several years ago, post-95s surnamed Li said, “I felt that the brand is not suitable for young people.” Yet after recently discovering that the brand has launched many good-looking and trendy clothes, Li bought a T-shirt from the brand’s Coca-Cola collection.

Like Peacebird, many time-honored Chinese brands have taken the initiative to launch bold transformations and rejuvenate their brands by introducing new concepts, techniques and models.

With the emergence of new Chinese brands, GENANX launched a T-shirt this past spring which has been purchased over 100,000 times on the Shanghai-based trendy-lifestyle platform DEWU App. China’s beverage brand Genki Forest, which produces an eponymous brand of sugar-free and low-calorie drinks, has become a real hit over the four years since its launch, while the official account of cosmetic brand Perfect Diary has gathered more than 25 million followers, racking up more than 1 billion views each month.

According to a recent report on Chinese brands issued by AliResearch, Chinese e-commerce giant Alibaba’s research arm, over 80 percent of products consumed by the Chinese population on the company’s Tmall store in 2019 were manufactured by domestic brands. Data also indicates that 173 of China’s home-grown brands reported a sales volume of over 100 million yuan ($15 million) during last year’s “Double 11” online shopping festival, accounting for nearly 60 percent of the total revenue.

While some domestic brands evoke feelings of nostalgia, others ignite young consumers’ sense of cultural identity and national pride.

To appeal to more young consumers, many domestic brands not only cater to their aesthetics and needs in product design, but also actively explore new forms of business such as new retail and live-streaming e-commerce to advertise their products.

On June 7, GOME, one of the largest electrical appliance retail outlets in China, and CCTV.com held a live-streaming session for Chinese products, which was viewed by roughly 10 million people, selling products worth a total of 720 million yuan (over $100,000).

Experts say that the trend is not only due to the rise of China’s manufacturing sector and Chinese brands but also consumers’ pride in the nation. The rise of these brands is also attributable to the upgrading of the country’s manufacturing sector, Chinese people’s increased consumption capacity and confidence in Chinese culture, as well as joint efforts of the government, media and companies.