Recently, a Facebook user living in Washington shared his experience of buying a fridge and having to wait more than four months for the product to be delivered during the COVID-19 epidemic. 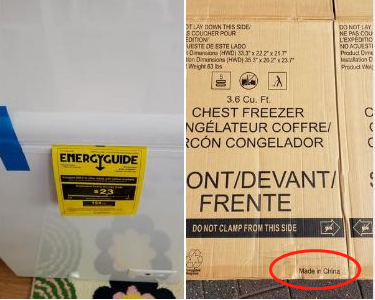 Photo shows the words “Made in China” on the packaging of a fridge bought by a Facebook user living in Washington who said he waited for more than four months for delivery during the COVID-19 epidemic in the U.S.

With the COVID-19 outbreak leading to people hoarding more food, demand for fridges surged, and they had been sold out since March, the man recalled, saying that he ordered a fridge online in mid-April, but the product was out of stock until Aug. 26.

When he finally did bring a fridge from an offline store home, he found that the product was made in China. “It’s better not to decouple from China,” he said.

The man’s remark revealed that China and the U.S. have an economic relationship that is as inter-connected as it is possible to be.

For over 40 years, China and the U.S. have forged closely entwined economic ties. The Wall Street Journal said on June 14 that China has retaken its mantle as America’s largest trading partner. Statistics show that the trade volume between the two countries reached $234 billion in the first half of this year, and exceeded $50 billion in June alone.

Over 70,000 American businesses have made investments in China with an annual sales revenue of $700 billion. 97 percent of these countries are making a profit.

According to a survey by the American Chamber of Commerce in Shanghai, 92.1 percent of its members said they do not have plans to leave China, even as Trump pushes to decouple from the country.

However, the Trump administration tends to act capriciously and wants to decouple the world’s two largest economies without considering the possible harm this will do to the business and science community or ordinary people. On Sept. 7, Trump told a Labor Day news conference at the White House that the U.S. will end its reliance on China once and for all.

According to a report titled “Urged by Trump to Decouple, U.S. Companies Want More China Faster” by Bloomberg on June 28, thanks to a flexible supply chain and close relationship with vendors in China and elsewhere in Asia, Rural King has managed to avoid shortages of goods that many retailers experienced during U.S. lockdowns. Pittman’s advantage is that he has more than 100 suppliers in China.

The U.S. business community is particularly concerned about science and technology cooperation between the two countries, and wants protection in their fields rather than confrontation in the economic relationship, Medeiros noted.

An article published by the Wall Street Journal on June 2 said that U.S. dependence on China isn’t just about buying masks or iPhones. China’s companies are major customers of U.S. high technology, and its students, who account for one-third of all the international students in the U.S., help fund America’s universities. Meanwhile, labor in China helps Apple churn out the devices quickly, and other economies are unlikely to replicate the Chinese mainland’s economies of scale.