Wen Shishan, a 59-year-old inheritor of Fuyang oil-paper umbrella making techniques in the Fuyang district of Hangzhou, east China’s Zhejiang Province, has been devoted to carrying forward the handicraft for over 30 years. 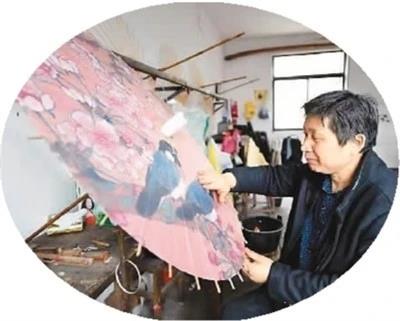 The oil-paper umbrellas made by Wen are not only popular among young people, but also have been sold to overseas markets in countries and regions such as Japan, South Korea, the US, Europe and the Middle East.

The craft for making oil-paper umbrellas enjoys a history of over 1,000 years. Wen took over the responsibility of inheriting the craft from his father when he was in his 20s. At that time, the traditional craft was experiencing a crisis regarding its inheritance and future, and it was regarded as “something to be excluded from the market.” In Wen’s village, there were few craftsmen who were still making oil-paper umbrellas at that time and few villagers would like to buy one such umbrella. However, these difficulties didn’t hold Wen back, but propelled him to work harder to become one of the best players in the craft.

Wen made many efforts to improve the umbrellas in two aspects – boosting their quality and introducing the handicraft to more people so that they might know more about it and fall in love with it.

In 2003, Wen bought a phone, a computer and a digital camera, having started to learn computer skills on his own in preparation for selling his umbrellas online. After he opened an online shop, Wen photographed the umbrellas he had made and then uploaded the photos to the platform to promote his products. The first online order Wen received was placed by a client from Japan. Gradually, the oil-paper umbrellas made by Wen gained the recognition of more and more overseas clients.

In January 2018, Wen participated in a cultural exchange activity held in Athens, Greece. During the activity, visitors were invited to experience the craft of making oil-paper umbrellas. After the conclusion of the activity, a local school contacted the Chinese Embassy in Greece in the hope of inviting Wen to the school to introduce the craft. But as Wen’s visa would soon become invalid, he didn’t go to the school in the end.

At the end of 2018, Wen opened an account on Douyin, the Chinese version of TikTok, and began to promote the handicraft on the short-video platform.

In Wen’s eyes, oil-paper umbrellas are not only goods for sale, they are also carriers of traditional Chinese culture.