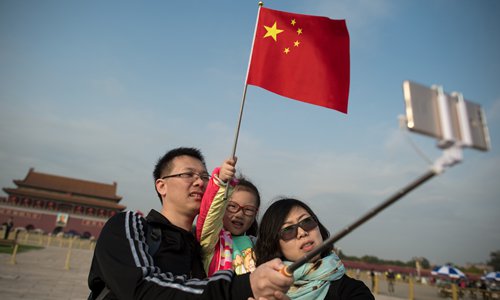 Reporters raise their hands for questions during a press conference at the 19th National Congress of the Communist Party of China in Beijing on Sunday. Photo: Xinhua

China has made progress in employment, housing, education and its social security system since 2012, especially for underdeveloped areas, officials from the ministries of civil affairs, education and other relevant departments told a press conference at the 19th National Congress of the Communist Party of China (CPC) on Sunday.

In the area of employment, Human Resources and Social Security Minister Yin Weimin said, “We’ve helped 8.8 million people in strained circumstances find jobs,” then adding that the total number of rural migrant workers increased from 263 million in 2012 to 282 million in 2016.

Yin said the registered unemployment rate in Chinese cities stood at 3.95 percent at the end of September, the lowest in years.

“The number of counties with subsistence standards lower than the national level has been cut from 1,521 in 2015 to 72 … and the basic standard of living of nearly 60 million people with subsistence allowances in urban and rural areas and special difficulties have been basically guaranteed,” said Huang Shuxian, Minister of Civil Affairs.

Other officials said that preferential policies in rural areas would carry on into the future to support local development.

“To repair the unbalanced, inadequate development of medicine in remote areas, we plan to begin cooperating between regions with much better medical resources and to enhance the quality of public health services,” said Li Bin, Minister of the National Health and Family Planning Commission.

“All of these moves accord with the shift in the contradictions in Chinese society and will help solve the income gap problem between different social classes as well as regional gaps,” Hu Xingdou, a professor at the Beijing Institute of Technology, told the Global Times on Sunday.

General Secretary of the CPC Central Committee Xi Jinping said in his report to the 19th CPC National Congress on Wednesday that “the principal contradiction facing Chinese society now is the contradiction between unbalanced and inadequate development and people’s growing needs for a better life.”

Xi went on to explain, “While China’s overall productive forces have improved and in many areas our production capacity leads the world, our problem is that development is unbalanced and inadequate. This has become the main constraint in meeting people’s needs for a better life.”

“Placing more importance on balanced development would help promote fairness and justice in society and would confirm the CPC’s promise to enhance people’s sense of fulfillment,” Hu concluded.

In relation to this, Minister of Education Chen Baosheng told the press conference, “We have unreservedly promoted equity in education … we’ve provided equal treatment to urban and rural schools in infrastructure, teaching posts, public funding per student.”

In the area of child protection, a caring and protecting mechanism was improved for those rural left-behind children, Minister of Civil Affairs Huang Shuxian said, noting that it includes a special “joint custody and accompanied growth” method and pilot projects for the protection of minors.

Both Chen and Huang said on Sunday that there are more policies on helping child development in remote areas coming in conformity with the 19th CPC National Congress report.