Xincheng county in south China’s Guangxi Zhuang Autonomous Region has been relying on its rich mineral resources in its mountainous areas to fight poverty in recent years. “People couldn’t grow crops here as there were stones everywhere. We could only let cattle graze on the fields at the foot of the mountains,” said Wei Yongping, a native of the county, who is also deputy head of the stone processing plant of Xincheng Western Mining Co., Ltd.

He never expected that the barren mountains that blighted agriculture would one day become invaluable assets.

“Xincheng contains over 1 billion cubic meters of many varieties of marble, and they are easy to exploit,” Wei said, explaining that the county’s marble has been sold domestically and internationally.

Furthermore, the county is accelerating the construction of a special engineering new material innovation industrial park invested by East Group Co., Ltd. on the bank of the Hongshui River.

“We mainly produce special materials needed for high-speed railways, tunnels, underground projects and roads, with an estimated annual output of up to 2 million tons,” said Huang Yong, a manager of the company.

Xincheng has large deposits of rocks that contain up to 56 percent of calcium carbonate, giving it broad prospects for exploitation, Huang said, adding that the company finally decided to launch the project in the county after three years of surveying work. 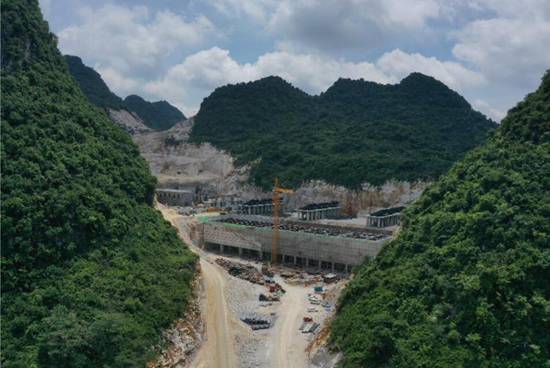 The company will also build five cargo berths with a capacity of 500 tons each, with an estimated annual throughput of 100,000 containers and 5 million tons of bulk cargo.

“Only by protecting our lucid waters and green mountains can we have invaluable assets,” said Li Lizhi, head of the project’s first tunnel team.

With 28 years of experience in tunnel construction, Li said that the company has placed great importance on environmental protection from the very beginning and on safeguarding the interests of local villagers.

The project has also been delivering benefits to local residents. “We can earn money near our homes and take care of our families, so we are willing to work for the project,” said Lan Danghua, a resident of Mati village in the county’s Hongdu town. Lan began working in the industrial park along with several other villagers soon after the project started.

“Except for core technicians, we give priority to hiring local villagers, especially poor households and people who have been lifted out of poverty,” Huang said.

He added that the company will also work with local vocational schools on poverty alleviation through education by providing funds to train industrial workers, which is expected to create over 600 job opportunities.