51-year-old Colombian Hector Palacio recently wrote a Latin American-style song in Chinese as a gift to China, a country where he has spent nearly half of his life.

The song “China is Good,” using a cheerful and catchy melody, expresses his love for the country.

Although the lyrics are simple and even contain some grammatical errors, Palacio’s sincerity still bestows a sense of inspiration to listeners.

Palacio came to Beijing to study in 1996, with a strong desire to have an exotic experience. However, his life in China was not as wonderful as first expected. He found the Chinese language and local food challenging, and it took him eight months to learn how to communicate in basic Chinese. 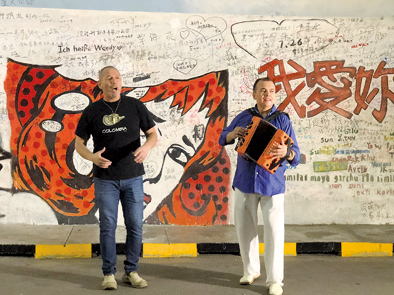 Palacio and Soto sing the song on the campus of Xiamen University.

“I stayed alone in my dormitory, feeling homesick every day,” Palacio told Xinhua News Agency, adding that this bitter beginning shows itself in his song.

Thanks to the friends he made in China, his life got better. As a sports fan, Palacio established a profound friendship with the people he met during soccer and basketball games, both Chinese and foreigners. It was this bond that helped him decide to stay in China. Of course, this part of his experience also found itself into the lyrics of his song.

In addition to Beijing, Palacio has worked in plenty of other Chinese cities including Shanghai, Hangzhou, and many in southern China. What’s more, he even married a Chinese woman in 2012 and settled down in the country.

In winter of 2017, Palacio met Angel Soto during a football game in southwestern China’s Chongqing municipality. Soto, a musician from Colombia, invited Palacio to his studio after hearing the latter’s wish to make a song.

They also filmed a music video and uploaded it online. The video has now been watched nearly 30,000 times.

“The song is dedicated to China, so the name and story are all about the country. I hope that every Chinese person will enjoy the song, and know it’s a gift from a Colombian,” Palacio noted.

“I hope the song can be a bond linking China and South American countries,” he added.