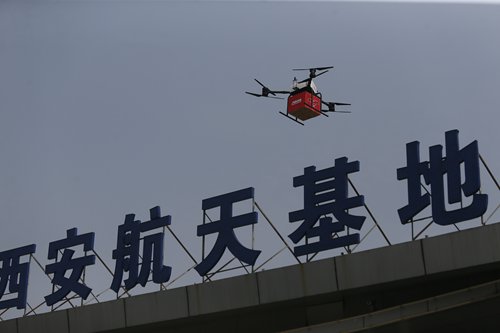 Chinese e-commerce giants and retailers are ushering in a new era of logistics services that will see packages delivered by drones, heralded by JD.com Inc’s new agreements in recent days with aviation companies, research institutions and local authorities to build the country’s largest drone network.

Domestic companies may have started drone deliveries later compared with foreign rivals such as Amazon, but they are expected to take the lead with the new system and apply it widely, while foreign multinationals are still researching the technology, experts said on Thursday.

As part of the strategy for pushing ahead with drone delivery, e-commerce retailer JD has signed cooperation contracts with China West Airport Group, Northwestern Polytechnical University and local authorities in Northwest China’s Shaanxi Province on Tuesday, with the aim of developing pilot projects, training staff and cultivating the next stage in drone delivery, according to a press release the company sent to the Global Times on Thursday.

The e-commerce platform is also offering 100 million yuan for winners of a competition to find the best solutions to introduce widespread drone delivery services in China, the press release said.

At the launch ceremony for the competition in Xi’an, Shaanxi where JD’s drone research and development center is based, the company also announced plans to develop a new VT1 drone that can carry packages weighing as much as 200 kilograms, meaning that it can load large home appliances such as TVs, fridges and washing machines, news website yicai.com reported on Thursday.

The new drone has a hybrid gas-electric engine, is 3.4 meters long and can fly 150 kilometers with only 2 liters of fuel, said the report, citing JD’s vice president Xiao Jun.

JD also has several smaller types of delivery drones that are being tested and operated in four provinces across China, according to media reports, including V2 and Y3 drones that can deliver parcels weighing from 5 to 30 kilograms.

The company also announced in May that it has begun testing a new “heavy-lift” drone capable of carrying a ton of cargo to Chinese customers in rural areas.

From June to July 31, delivery drones were used more than 800 times and traveled 4,000 kilometers in Xi’an, the Xinhua News Agency reported on Thursday.

“Like JD, domestic firms are aiming to expand drone deliveries in rural areas where infrastructure is poor and delivery costs are high… so it’s cost-effective to send drones into the countryside,” Jiang Hongchang, an independent industry analyst based in Shenzhen, South China’s Guangdong Province, told the Global Times on Thursday.

Using drones could help the company cut costs by more than 70 percent, Liu Qiangdong, JD’s founder, said in an interview in June.

However, “it may take some years for commercial use [of drones] to become widespread in the domestic market,” Jiang said, given difficulties such as the duration of battery power, the stability of flights and loading limits, as well as regulatory obstacles.

Chinese companies are not the only players looking to conquer aerial deliveries.

US-based Amazon was actually the first company to propose delivering packages with drones in 2013, Xu Yong, a delivery industry analyst, told the Global Times on Thursday.

“In fact, the future prospects for application of drone deliveries are more economic and feasible in the US compared with China, because the labor costs there are higher and the country is more sparsely populated,” Xu explained.

However, “JD drones started flying last year, yet those of Amazon are still being researched and tested,” Xu said, adding that JD is actually way ahead of Amazon in the drone delivery realm.

Besides, China is home to a complete industry chain for producing drones, and domestic firms have already taken a lead over their foreign rivals in terms of technologies related to drones, experts said.

For example, the Amazon Prime Air, the latest type of drone unveiled by Amazon in 2016, is only able to carry packages of up to 2.5 kilograms, far below the loading capacity of the JD drones.