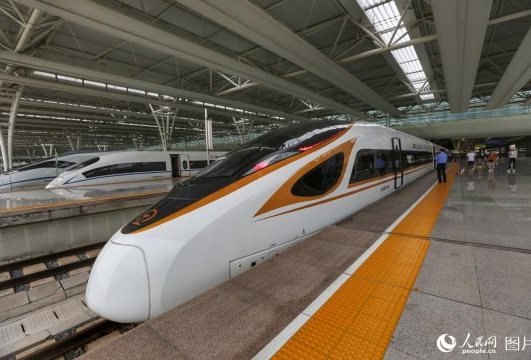 China’s latest high-speed train the Fuxing consumes only 3.8 KWh per 100 passenger-km when running at a speed of 350 km/h, according to Chinese newspaper Science and Technology Daily.

Fuxing bullet trains officially started operating at 350 km/h since Sept. 21, which has made China to reclaim its crown for the world’s fastest train service.

After multiple technical evaluations, the final scheme was chosen out of 46 preliminary conceptual plans.

Compared with older versions of China’s high-speed trains, the Fuxing has 12% lower air resistance and 17% of the energy consumption per 100 km.

It saves more than 5,000 KWh of electricity for a round trip between Beijing and Shanghai, Ding noted.

In addition, a number of sensing systems have been added to the train, empowering it with a smarter brain.

The smart high-precision sensing systems are able to sample one million pieces of data in just one second, Tao added.

The Fuxing bullet train has also applied passive safety technology for the first time. The technology, which uses energy absorption devices, guarantees the non-deformation of passenger in the event of a crash, Ding noted.