China is witnessing mushrooming growth in products that integrate new technologies and mechanisms tailored for senior citizens, so as to enable this group of consumers to better enjoy the benefits brought by the digital age. 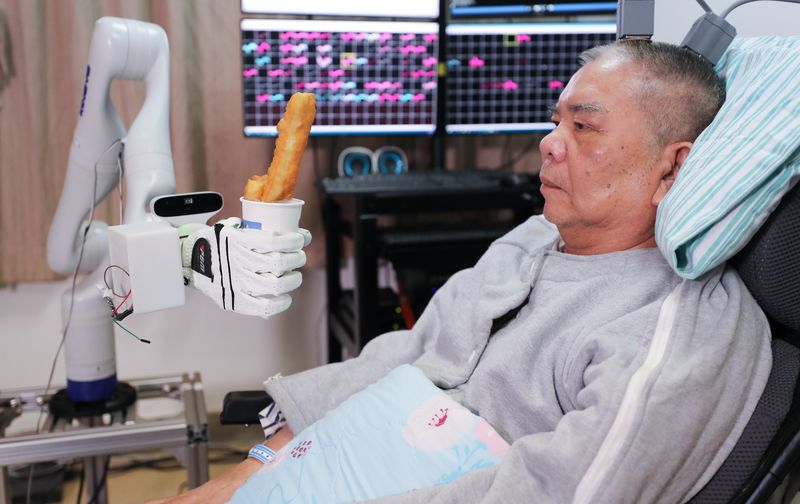 The number of people aged 60 and above exceeds 260 million, accounting for 18.7 percent of the total population, according to the results of the Seventh National Population Census. This large group of consumers has fueled the manufacturing of a large number of high-tech products for the elderly.

These high-tech products include nursing robots and smart care systems among others, which recently made an appearance at an expo held in Shanghai.

Nursing robots, which are comprised of diaper pants, two pipes, induction lines and processors, are particularly handy for disabled elderly people suffering from incontinence. When an elderly man urinates or defecates, the instrument automatically detects the process, immediately extracts the excreta and stores it in a dirt bucket. Then the warm water washing and warm air drying functions are activated. The whole process runs intelligently and automatically, and no nurses are required to intervene or operate the system.

Meanwhile, smart care systems, which use laser radar, cloud computing and big data technology to automatically detect and raise alarms for dangerous actions among the elderly, such as falling down, are designed to provide better health guarantees for elderly people who live alone.

In addition to the emergence of these senior-friendly products, many “senior versions” of mobile applications (APPs) have been launched, as it is not difficult to notice that a growing number of elderly people are surfing the Internet these days. The latest statistical report on the development of China’s Internet released by the China Internet Network Information Center indicated that 11.2 percent of Chinese netizens are aged 60 and above.

“The font is big enough and this APP is easy to use,” said an elderly woman surnamed Liu when using mobile banking for the first time under the guidance of staff at a branch office of the Bank of Communications.

In the “special care version” of the Bank of Communications APP that Liu was using, the home page has been streamlined to contain just a few icons, retaining only the business entrances commonly used by the elderly, such as “account inquiry”, “money transfer” and “financial management”.

With regard to products catering to the needs of senior citizens, Zhu Qinhao, director-general of the Shanghai Civil Affairs Bureau, pointed out that they should pay more attention to the application scenarios of science and technology, lay more emphasis on the service experience for the elderly, and make new technologies more suitable for senior citizens.

Dang Junwu, deputy director of the China Research Center on Aging, believes that while the elderly are slow to accept new technologies, once they form consumption habits, they have strong user stickiness.

“The integrated development of the Internet economy and the aging economy will certainly bring about many new business opportunities,” said Dang.