China’s development of heavy-duty machinery has earned so much pride for the country in recent years. The self-propelled cutter-suction dredger, Tianjing or Sky Whale, is one good example.

Surrounded by steel frames and crane arms, the vessel’s deck is more like a construction site. The only thing that distinguishes it from a real construction site is its clean environment. People on the vessel are required to put on safety helmets once they step out of the cabin.

China has a long history of dredging, though modern technology has since replaced human labor.

Tianjing has been hailed as a mighty tool for island-building because of its strong excavation and hydraulic reclamation ability. According to a crew member, Tianjing can excavate 4,500 cubic meters of mixture from the seabed each hour – the equivalence of a 0.5-meter-deep pit and a standard soccer field size. 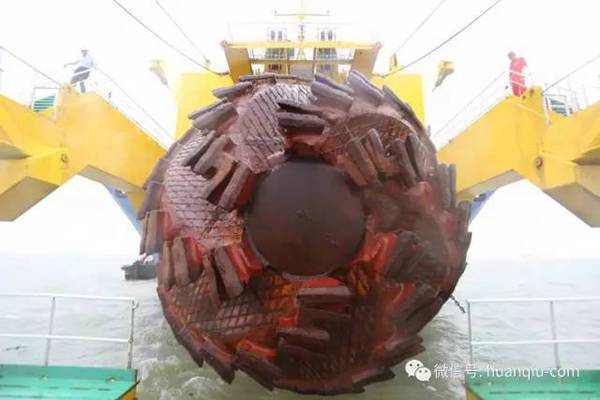 The reamer of Tianjing

Cuts rocks as easy as mud!

The vessel’s reamer has endowed it with powerful ability. The reamer is normally inconspicuous in pictures, but people will be astonished when standing right in front of it. The diameter of small reamers is 2.8 meters, while that of larger ones could reach 3.15 meters, said Wang Ming’an, former Tianjing captain and vice general manager of the Overseas Business Division of the CCCC Tianjin Waterway Bureau Limited.

It was learned that the unit price of the cutter tooth on the reamer, which is used for excavation, is 1,500 RMB ($223). Driven by a 4,200-kilowatt variable-frequency motor, the cutter teeth could excavate moderately- and highly-weathered rocks with compression strength as high as 40 MPa.

“Concretes can be easily ground by the reamer,” said Wang, adding that rocks are as soft as mud for the machine.
Powerful self-propelling ability, automatic dredging control system

In addition, the dredger has two other “killer skills”: powerful self-propelling ability and advanced automatic dredging control system. The cockpit located on the top floor of the vessel is the “brain” that realizes the two functions.

Covering an area of about 40 or 50 square-meters, the cockpit offers a strong taste of high-tech style that can easily be associated with the flight deck of a spaceship in a sci-fi movie.

The automatic dredging control system lies in the cockpit, integrating all operations in a 2-square meter station. The remote control is operated just by clicking the mouse or pushing the buttons. Crew members can even take a cup of tea while excavating, a staff on the vessel explained.

Positioning and self-propelling systems are on the two sides of the dredging control station. The staff member said that cutter-suction dredgers are not new as they have been widely applied in engineering dredging projects.

However, most of them are not equipped with self-propelling systems. They depend on other ships to mobilize to different work points. As Asia’s first self-propelled cutter-suction dredger, Tianjing can sail to any part of the ocean.

The cockpit of Tianjing

Wang said all CCCC Tianjin Waterway Bureau Limited vessels are subjected to the export limitations. He added that their vessels could work in foreign countries, but purchases are not allowed.

According to Wang, when the dredger arrives at a construction site, a key pile with a diameter of 1.8 meters is then laid and a transverse axis arranged on both sides of the ship bow.

An axle beam weighing 1,100 tons reaches out to press the cutter in case the latter rebounds after touching hard sand and rocks under the sea, Wang explained. Tianjing’s mud conveyance distance is 6,000 meters.

Tianjing looks like a walking person in water as its main and supporting piles submerge in turns.

Crew members do not feel bored as Tianjing is equipped with facilities such as dormitory, playroom, fitness room, laundry, medical room and canteen.

The average age of the crew is 28 years old. Usually, these young people have to work 3 consecutive months before they are allowed to have vacation.

How to keep the food and vegetables fresh is a challenge. Li Yuelai, Tianjing political commissioner and deputy Party secretary of the CCCC, said most vegetables were damaged by wind and storm after some time.

Tianjing has made China’s dredging industry comparable to the world’s leading companies, said a CCCC staff. Before 2005, Chinese dredging companies largely relied on imported equipment and the country’s dredger-building technology was undeveloped as a result of foreign blockade.

The able dredger has so far taken part in many hydraulic reclamation projects, Li said, emphasizing that Tianjing has attracted the attention of some foreign engineers.

Besides Tianjing, China has also developed a more advanced self-propelled cutter-suction dredger named Tiankun. It has a designed production capacity of 6,000 cubic meters per hour and cutter efficiency of 5,000 kilowatts, a CCCC staff said.

Capable of evacuating 35 meters in depth with maximum conveyance distance of 15,000 meters, Tiankun tops the world in terms of long-distance delivery capacity and other capabilities. The research and development of Tiankun has promoted the transformation of the country’s dredge-building technology from “Made in China” to “Created in China.”