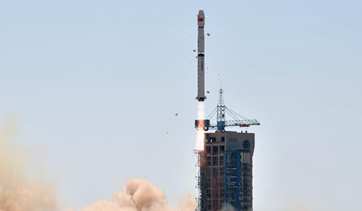 China is set to launch four significant satellites for space science during the 13th Five-Year Plan period (2016-2020), after successfully launching the Hard X-ray Modulation Telescope Satellite at Jiuquan Satellite Launch Center on June 15, according to China’s State Administration of Science, Technology and Industry for National Defense.

A China News report included a statement by Zhao Ji’an, an employee of the administration, noting that China will launch the first test satellite for detecting electromagnetic anomalies from space in August 2017. The move is aimed at improving the country’s earthquake monitoring network.

In addition, China will launch the Chinese-French Oceanography Satellite in 2018 to enable ocean wave prediction and disaster prevention and mitigation; the Chinese and French astronomy satellite in 2021 for the research of dark energy and cosmic evolution; as well as a Mars probe in 2020, which is poised to achieve breakthroughs in key technologies like orbiting, landing and inspection.

Zhao noted that the administration is also working on new projects, such as the Einstein Probe and Water Cycle Observation Mission.