The Internet Society of China (ISC) announced that it will establish an e-sports commission at a meeting held at Tsinghua University on March 2.

The tasks of the e-sports commission were detailed at the meeting, which was held together with an e-sports summit themed with “e-sports and smart economy”. 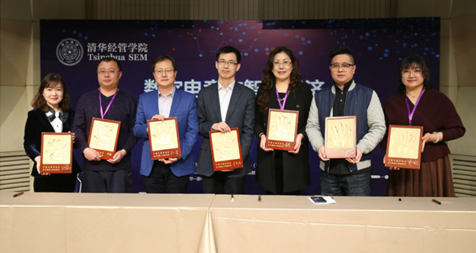 Guests show their signatures and handprints at the ISC meeting, March 2, 2019. (Photo by Xu Zijian from Xinhua News Agency)

The commission will assist competent authorities to enhance management of the e-sports industry, promote the combination of e-sports and national education strategies, guide favorable and sustainable development of e-sports industry in China, and prepare for smart city construction.

It will also integrate industrial resources, organize relevant enterprises and institutions to carry out e-sports activities, and publish industrial data and surveys.

Other tasks of the commission are conducting domestic and international industrial communication and cooperation, participating in global e-sports policy making and setting international standards and specifications.

Now the commercialization and internationalization of the industry have been put on the agenda, to accelerate the “bringing in” and “going global” process of the industry, Song added.

At Asian Games held in Jakarta last year, e-sports for the first time had a presence at a major sporting event. Team China took the first-ever gold medal of e-sports at the event, delivering an outstanding performance by winning a total of 2 gold medals and one silver medal at the games. According to the 2018 China E-sports Development Report, China had 250 million e-sports gamers in 2017, more than half of the global total. China’s e-sports market value reached 5 billion yuan ($746 million), and was still rising.

In 2016, China’s Ministry of Education listed “e-sports and management” as a college major, marking the official inclusion of the training of professional e-sports personnel in the country’s higher education.

32.6 percent of Chinese gaming enthusiasts said they were willing to take jobs in the e-sports industry, and nearly a quarter of parents voiced support for their children in this regard.