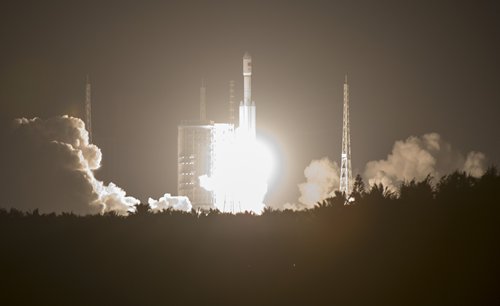 China will master rocket recycling technology on its new CZ-8 carrier rocket by 2020 and challenge the US monopoly in the field, China Media Group reported on Thursday.

A Chinese expert said that if the agenda can be realized on time, China will become the world’s second rocket power to master the technology, offering the prospect of a reduction in cost for carrier rockets.

At an aerospace industry seminar on Tuesday, leading Chinese carrier rocket designer Long Lehao said that China is expected to realize vertical recycling – similar to the technology employed by US-based firm SpaceX – by 2020 at the earliest on its CZ-8 rockets. This will further lower the price tag of a launch and boost China’s chances of getting international commercial satellite launch orders, the CCTV report said.

Lan Tianyi, founder of Beijing-based Ultimate Blue Nebula Co, a space industry consultancy, said China will become the second rocket power to have this capacity, putting the country ahead of Russia and the EU.

However, Lan said that while the aim of recycling rockets is to reduce costs for launch operators, whether this can be achieved remains to be seen.

The recycled rockets developed by SpaceX are reported to have helped the company reduce launch costs by as much as 30 percent, according to media reports.

“There is no way to verify SpaceX’s claim, as it is the only company that owns the technology, and China has to wait for the moment when it has successfully recycled a rocket to see whether the costs can be lowered,” Lan told the Global Times on Thursday.

SpaceX claims that a reusable rocket just needs refueling and a few replacement parts before blasting off again, but it’s not that simple, Yang said.

“Even when the rocket is recycled, it needs to be checked, refurbished and serviced, and all this costs money,” Yang said. “There is also the issue of how many times the rocket can be recycled, and whether that will be enough to bring down costs.”

So far, SpaceX has only conducted a few launches with used rockets and the company has not achieved profitability, Yang pointed out.

“In the time period since the US has mastered the recycled rocket technology, there has not been much impact on China’s orders,” Lan said.

“In fact, it is the US’ pursuit of recycled space transport vehicles that has delayed the US rocket sector, and opened up a precious window for Europe’s Ariane rockets and Chinese rockets to take off in the global commercial launch market,” Yang told the Global Times on Thursday.

According to Lan, compared with other countries that offer rocket launching technology, China enjoys a cost advantage and offers a one-stop solution for clients, including all the services and management procedures.

Lan said clients for China’s pure-launch service include South America countries, Canada, the Netherlands, Denmark and Poland while those for satellite plus launch services include Laos, Algeria, Nigeria, Bolivia, Venezuela and Belarus.