Students at the Instituto Cultural are learning Chinese at a class offered by the Confucius Institute at the University of Panama. (Photo by Zhu Dongjun from People’s Daily)

Instituto Cultural, a school in Panama established nearly 60 years ago, is the first school in the country adopting bi-lingual education in Spanish and English, and also the first one introducing computers and internet. Now, it is taking lead again in Chinese language teaching.

“We planned to launch Mandarin course three years ago. Due to the rising international influence of China, students need to learn Chinese for better development,” said the Katyae Cheverria, principal of the school.

She introduced that the school was distressed since it was hard to find Chinese teachers at the beginning, but the situation was relieved by the building of Confucius Institute after the China and Panama established diplomatic relations.

It is quite surprising that students at the school can speak good Chinese. “At the beginning, some concerned that Chinese language would be too difficult that it might discourage students from learning it. Therefore, we decided to arouse students’ interest by not including the scores of Chinese in their school report,” explained the principal. 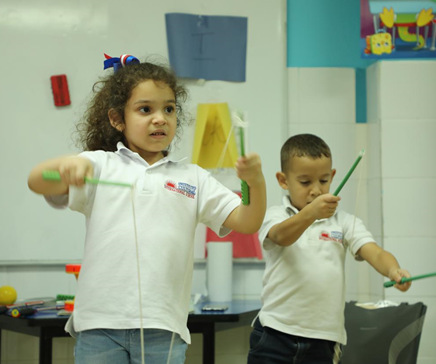 “But now, students are all fond of Chinese classes and are making outstanding performances,” she added.

“We not only teach Chinese but also Chinese culture. Cultural exchanges will build a heart-to-heart bridge for people from Panama and China. We hope to cultivate more envoys of bilateral friendship,” said Cheverria.

When Yu Xin, a Chinese teacher from the Confucius Institute at the University of Panama brought two diabolos to the classroom, students all showed great enthusiasm. Over 10 children soon crowded around Yu, wearing high expectations and excitement on their faces.

In June 2017, China established diplomatic relations with Panama. Three months after that, the Confucius Institute at the University of Panama was inaugurated. Currently, the institute educates nearly 400 students.

Panama was celebrating two important festivals in early November. But the students maintained high enthusiasm for learning Chinese and requested to continue Chinese classes during the holiday leaves, Wu Junhui, Panamanian Director of the Confucius Institute at the University of Panama, told People’s Daily proudly.

Gamboa, a 65-year-old architectural engineer, is the eldest student at the class for beginners at the Confucius Institute. He felt pressured because he was busy with work and learnt slowly, but he never gave up learning Chinese.

“China is developing so fast. I want to go there and have a look. That’s the direct driver of learning Chinese,” said the engineer, who also helped his wife, a Chinese culture lover, with her Chinese.

“I’ve made up my mind that no matter how hard it will be, I’ll always try my best to learn Chinese well,” said Gamboa.

An increasing number of Panamanians from all sectors have started learning Chinese since the establishment of bilateral diplomatic relations.