The construction of new infrastructure including 5G and data centers has been picking up speed in China, fuelled by a surge in demand for telecommuting, online entertainment, and voice and video call services. 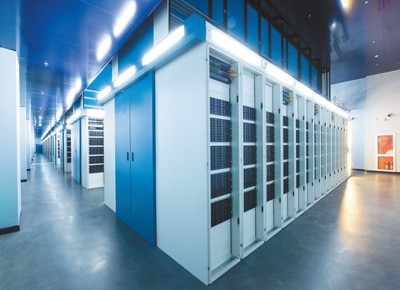 Photo shows a scene of a data center of Chindata Group. (Photo/People’s Daily)

Several companies have announced plans to scale up their data centers. Chinese e-commerce behemoth Alibaba will invest 200 billion yuan (about $28.7 billion) in the construction of data centers and other projects, while Baidu, the leading search engine in China, plans to have 5 million servers in place in 10 years.

With the rapid development of the digital economy, the trend of building large big data centers in the country is becoming more obvious. Data shows that the number of ultra-large-scale and large data centers accounted for 12.7 percent of the total data centers in China in 2019.

Due to the lack of scalability of traditional data centers, the next generation will be on-demand in the digital era.

The new generation of data centers should be standard, modular, intelligent, green and safe, according to Zhang Chunming, an associate researcher at the Institute of Computing Technology under the Chinese Academy of Sciences.

Modular means that a data center can be built with prefabricated modules such as temperature control and IT modules, just like building with Lego blocks, Zhang added.

The modular data center solution can drastically save on time and construction costs. It takes just six months to build a data center using prefabricated modules, compared to 18 months with the traditional construction model. For example, the prefabricated modular data center of Huawei Cloud, a subsidiary of the Chinese tech giant Huawei, in Guangdong’s Dongguan was completed in six months. The five-story center has 1,000 standard server cabinets.

The current cloud data centers will be upgraded to intelligent computing centers due to the exponential growth in demand for artificial intelligence computing, which will account for more than 80 percent of future computing.

Experts predict that in five to 10 years, intelligent computing centers will be deployed in key industries and regions on a large scale, which will become the core infrastructure for building a smart society with an intelligent economy.