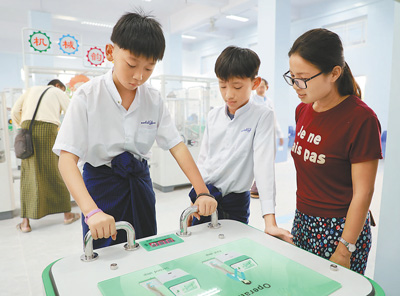 Burmese students have an interactive learning experience in the museum. (People’s Daily/Sun Guangyong)

Co-hosted by China Science and Technology Museum and the Ministry of Education in Myanmar, the mobile exhibition is scheduled to be held in Mandalay for two years.

Covering an area of over 800 square meters, the exhibition includes more than 60 items such as 3D printing technology, intelligent robots, and Naked Eye 3D televisions, ranging from such fields as basic science and life science to information technology and health.

After it opened to the public, 12 universities and several high schools and primary schools expressed their intention to visit the museum. About half a month after it was open, thousands of people had already visited the mobile museum.

This exhibition will open a window to science for Burmese teenagers and cultivate their interest, innovation and curiosity in science, said Thein Win, Director-General of the Department of Higher Education in the Ministry of Education, Myanmar.

Mandalay boasts a number of science and arts colleges, normal universities, and technical schools, but these schools are not equipped with advanced devices for their science courses.

“Based on the mobile sci-tech museum, we plan on building a Mandalay science and technology museum to popularize scientific knowledge among the local people,” said a docent with the museum.

A Belt and Road project, the China mobile sci-tech museum first landed in Myanmar at its capital Naypyidaw in June 2018. The 18-month exhibition has received a total of 50,000 visitors and organized training courses for 600 primary and high school principals and teachers.