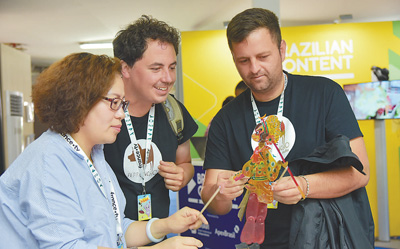 Chinese animations introduced during the 2019 Annecy International Animation Film Festival caught the eyes of publishers and investors from foreign countries and prompted them to seek cooperation.

During the festival held from June 10 to 15, China organized a promotion event to advertise domestic animations from 14 companies and institutes including China Central Television and the Beijing Animation and Game Industry Alliance.

The general manager from a Spanish animation company said his company has produced a well-received 15-episode cartoon series together with a Chinese counterpart. “We want to work with China because it’s rich in cultural heritage and features creative design and fine production.”

Arnold Boulard, founder of French animation company Gaoshan Pictures, is optimistic about the future of the Chinese animation market and is now co-filming an animation production with Chinese companies.

He mentioned that with China’s animation industry developing and its film production improving, many well-made Chinese animation works have attracted the attention of international cartoon companies.

“We could draw inspiration from Chinese stories and produce high-quality international animated cartoons together,” he said.