A new pharmaceutical drug for hepatitis B was launched in Beijing at a conference on May 25, People’s Daily reported.

The drug, Novaferon, will give hepatitis B patients new options and marks a breakthrough in China’s creation of advanced protein biotechnologies, said Yang Xizhong, executive vice president of the Chinese Foundation for Hepatitis Prevention and Control. Wang Guiqiang, director of the Infectious Disease Department at Peking University First Hospital, believes that the new medicine is a fantastic weapon for clinical doctors when it comes to immunotherapy, and he expects more patients will benefit from the new drug.

It is hoped that more experts of hepatopathy can support the experimental research of Novaferon after its launch, in a bid to promote the formulation of guidelines dealing with the hepatitis B virus. Liu Longbin (right) issues a letter of appointment for lifetime consultancy to academician Hou Yunde (left) of the Chinese Academy of Engineering. 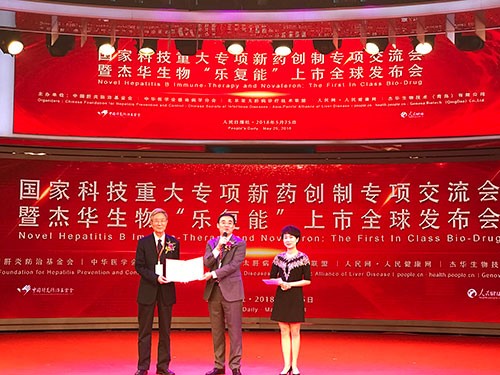 Based on figures from 2015, the World Health Organization has already hit global targets to reduce new cases of viral hepatitis by 90 percent and is set to achieve 80 percent treatment coverage for chronic hepatitis B and C patients by 2030.

According to Liu Longbin, chairman of the drug’s manufacturing company Genova Biotech, the company has a vision to only make “first-in-class” medicines. He said only by innovation can a company grow into a world-class biotech enterprise.