China and Latin America have seen vibrant trade amid the pneumonia outbreak, with trade between the two sides totaling 477.2 billion yuan in the first quarter of 2020, according to data from the General Administration of Customs in China. 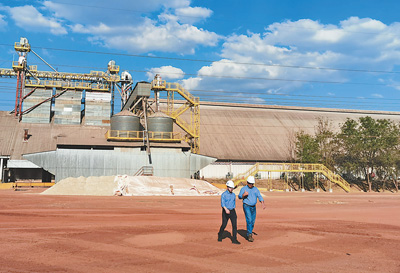 Although trade declined year on year due to the disease, bilateral cooperation should see greater growth as both parties gradually shake off the impact of the pandemic, experts pointed out.

China, as an important trading partner of Latin America, has helped ease the export pressure in Latin American countries amid the pandemic.

Brazil’s trade surplus with China reached $4.3 billion during the first three months of the year, accounting for 77.9 percent of the country’s total trade surplus.

Exports of Brazilian soybeans, chicken and beef to China registered growth over the period, according to the Brazilian Agriculture and Livestock Confederation.

Meanwhile, cross-border e-commerce business continued its momentum during the pneumonia outbreak, with an increasing number of high-quality goods from Latin America such as cherries and blueberries entering Chinese e-commerce platforms.

Experts believe that as China picks up speed in bringing back economic and social order amid the pandemic, it will become more involved in Latin America’s economic construction and promote bilateral cooperation in areas including AI, pharmaceuticals and 5G technology.

China and Latin America enjoy complementary advantages and sound economic and trade relations in the long run, noted Alicia Bárcena Ibarra, executive secretary of the Economic Commission for Latin America and the Caribbean, adding that the bilateral trade is resilient in the face of challenges and has broad room for development.