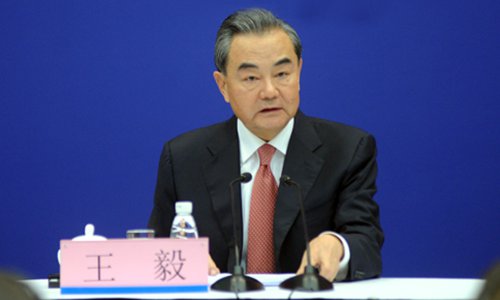 China’s foreign minister said Wednesday there is great potential for Sino-Indian cooperation as the two countries strive to mend ties torn by the recent border standoff and return to the track of cooperation.

India announced on Tuesday that its Prime Minister Narendra Modi will attend next week’s BRICS summit in Xiamen, East China’s Fujian Province, a day after India pulled back its troops from the Chinese territory of Doklam.

“As two big neighbors, it is natural for some problems to occur as interaction increases. What’s important is that [the two countries] should put these problems in suitable positions, respect each other, follow the consensus reached by the leaders of the two countries and

“We hope China and India could join hands to achieve mutual prosperity and make contributions to the peace and development of the world,” Wang added.

He did not confirm whether there will be a bilateral meeting between Chinese President Xi Jinping and Modi at the BRICS Summit, but said such meetings depend on mutual intentions and whether there is enough time.

Xi will chair the BRICS Xiamen Summit from September 3 to 5. He will also chair the Dialogue of Emerging Markets and Developing Countries on mutually beneficial cooperation for common development.

“Despite the border standoff, which is a bilateral issue, China and India have many common interests in multilateral and international cooperation. The cooperation interests outweigh our differences,” Qian Feng, an expert at the Chinese Association for South Asian Studies, told the Global Times on Wednesday.

China and India have cooperated in fighting unjust and unreasonable treatment toward developing nations and in winning a greater voice against developed countries. The two countries have also cooperated closely on global issues such as climate change, counter-piracy, food security and counterterrorism, Qian said.

“Not only at the BRICS Summit, at the G20 and many other platforms, China and India have jointly pushed for reforms and a new global economic order. In these issues, Beijing and New Delhi often voice similar opinions,” Qian noted.

China and India are two of the fastest-growing major economies. Even during the standoff, multilateral economic cooperation was not hindered.

On August 4, India signed a $329 million agreement with the China-initiated Asian Infrastructure Investment Bank (AIIB) to finance the Gujarat Rural Roads Project. The project will reportedly improve rural road connectivity and accessibility to 1,060 villages in all 33 districts of Gujarat state, benefiting about 8 million people, the Economic Times reported.

“Although China and India have poor strategic mutual trust, domestic economic demands require cooperation. China needs India’s market, whereas India can see for itself that it cannot rely on the West on economic matters, such as infrastructure, which is China’s strong point,” Lu Yang, an assistant researcher at Tsinghua University’s Belt and Road Strategic Research Institute, told the Global Times.

She noted that economic demands were one of the reasons that drove the two countries to resolve the Doklam standoff.

In the first half of this year, India filed 12 cases against Chinese imports, sparking concern from China’s Ministry of Commerce.

Lu said that India’s anti-dumping cases against China have existed for many years and recently came under the spotlight due to the Doklam tensions.

“The cases were not necessarily driven by populist sentiment in India. For example, China exports many statues of Hindu gods to India, which was a blow to local Indian artisans. However, India’s underdeveloped domestic industrial system realized that many Chinese products are more competitive by nature,” Lu told the Global Times.

Lu’s opinion was echoed by Qian, who said a better solution for the trade imbalance and the anti-dumping cases would be for the two countries to adjust their trade structure through negotiations.