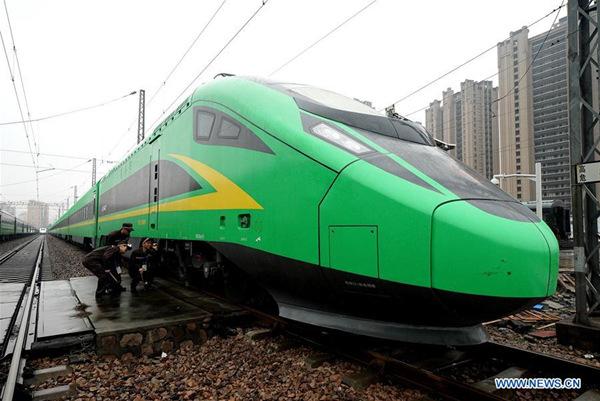 Workers check a CR200J train at the China Railway Shanghai Group Co., ltd. in Shanghai, east China, Jan. 6, 2019. The CR200J train, with a centralized power system that runs 160-km-per-hour, will be put into use before the Spring Festival travel rush in 2019.(Xinhua/Chen Fei)

China’s Spring Festival travel rush will begin on Jan. 21, and the country is already gearing up to guarantee the smooth operation of services during the largest annual human migration on earth.

Guo Zhuxue, vice president of the China Railway Corporation, noted that the country would further expand the frequency and coverage of its Fuxing bullet trains. The longest Fuxing high-speed train made up of 17 cars, as well as the centrally powered electric Fuxing trains with a maximum speed of 160 kilometers per hour, will both join the travel campaign for the first time this year, Guo disclosed.

China’s railway system will handle over 10 million passengers per day during the travel rush, and over 60 percent of the passengers will take high-speed trains to go home.

Last year, China built 86,000 kilometers of road, including 6,000 kilometers of expressway, bringing the total road mileage to 4.86 million km. With 190 million private cars now running across the country, China is bound to see a higher ratio of people hitting the road during the Spring Festival travel rush. “Expressways will continue to be free for small-sized passenger vehicles during this year’s Spring Festival holiday,” disclosed Vice Minister of Transport Liu Xiaoming.