China will officially enact its biosecurity law on April 15. As the country steps up efforts to enhance public education on biosecurity, Chinese citizens are gaining an increasing awareness of preventing the import of harmful organisms and advancing ecological progress. A customs office of Changsha, central China’s Hunan Province stationed at a post bureau for the first time seizes 21 living fish from incoming parcels. The fish are preliminarily identified as small tetras and have been detained according to law. (Photo from the official website of the General Administration of Customs)

Animal and plant quarantine at the customs is the first line of defense that safeguards national biosecurity. Last year, China’s customs districts seized quarantine pests in 69,500 batches from 102 countries and regions.

In the first two months of this year, they seized 172 types of pests in 7,942 batches, a 40.41 percent year-on-year surge in the number of interceptions.

Tulip seedballs are a commodity that customers always purchase from overseas around February every year. However, these propagating materials might carry massive pests, such as Ditylenchus dipsaci, Pratylenchus penetrans and Arabis mosaic virus (ArMV), which are all high-risk pests inspected by Chinese customs in imported tulip seedballs.

For instance, the ArMV is extremely contagious, which would damage multiple cash crops once imported, and seriously threaten China’s agricultural safety.

On an early morning, a mail van pulled into a depot under customs supervision of the Hefei International Mail Exchange Bureau, east China’s Anhui Province, where parcels shipped from across the world gathered. Customs official Zhang Chengzhi, upon X-ray examination and out of the box audit, discovered several living insects in glass bottles.

“There are more and more such cases in recent years,” Zhang said. “The living insects didn’t go through any quarantine or approval procedure, and might carry parasites, viruses and bacteria that threaten people’s health and ecological security,” he explained, adding that these insects might pose a risk for local species. 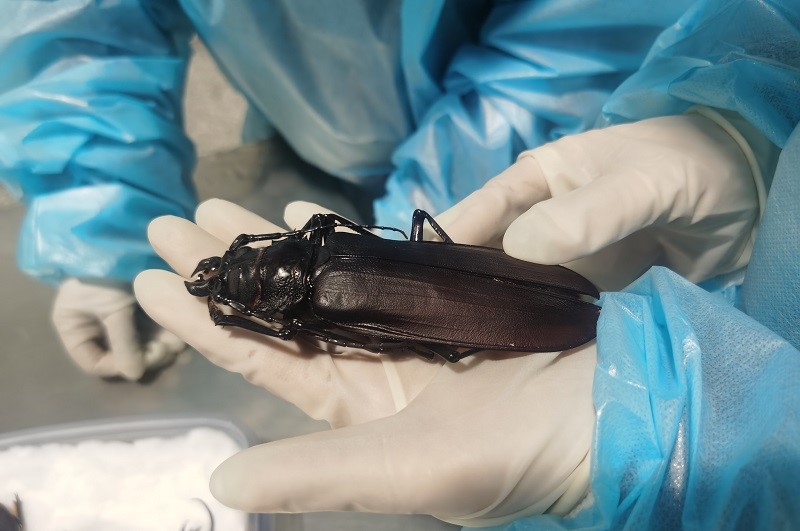 A customs office of Beijing stationed at a post bureau seizes 27 insect specimens in two boxes, including a Titan beetle, one of the largest known beetles in the world. (Photo by Zhang Min, from the official website of the General Administration of Customs)

“We don’t have any examining methods or materials for most of the invasive species here in China, so we must consult massive foreign documents. Meanwhile, we are equipped with large numbers of sophisticated equipment to increase the speed and accuracy of quarantine,” said Chen Yunfang with the technology center of Suzhou customs.

“Microscopes are our weapons. For instance, the scanning electron microscope can magnify the lips of nematodes, which are normally as small as 1 millimeter, by 30,000 times. It enables us to see clearly the heads of the nematodes,” Chen said.

Focusing on the identification of plant parasitic nematodes for over 20 years, Gu Jianfeng and his team from the technology center of Ningbo customs have built a smart identification system. “In the future, the time for identification will be shortened from a couple of days to minutes,” Gu said.

Suzhou customs’ transaction organization stationed in the post office handles nearly one million international parcels each year. An official with the organization told People’s Daily that the customs have established a multi-dimensional prevention and control network to prevent the invasion of exotic species.

Experts noted that many invasive species entered China due to the public’s lack of biosecurity knowledge, adding that non-trade channels are mostly how these species invaded.