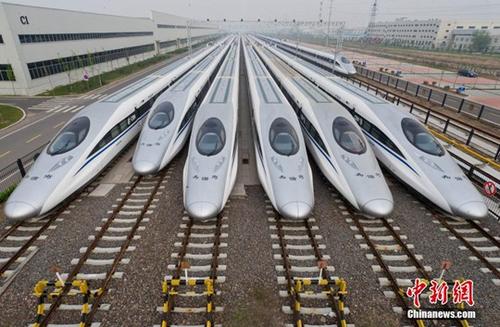 On Tuesday, China’s National Bureau of Statistics (NBS) released data revealing the drastic changes the country has made since the founding of the People’s Republic of China 70 years ago, especially after the implementation of reform and opening up in 1978.

According to NBS, China’s total operating mileage of high-speed rails had hit 30,000 kilometers by the end of 2018, accounting for over two-thirds of the global total and ranking first in the world.

The country is also home to 143,000 kilometers of expressways, with an annual growth rate of 25.8 percent. Among the world’s top 10 container ports regarding handling capacity last year, seven were in China.

Since the founding of the People’s Republic of China, the country has also been working hard to improve and reform its postal system. From a country where no express delivery service existed, it has become the world’s largest express delivery market. Statistics indicated that by the end of 2018, the number of postal business outlets stood at 275,000, 10.4 times more than in 1949.

The country handled a total of 5.07 billion postal parcels last year, up from 1.53 million in 1988. The express delivery industry of the country generated revenue of 603.8 billion yuan last year, accounting for 76.4 percent of the total revenue of postal services.

Moreover, China also witnessed considerable improvements in communication. Starting in 2014, the country quickly established the world’s largest and broadest-covering 4G network in just a few years. By the end of 2018, the country had 1.17 billion 4G users, accounting for 74.4 percent of total mobile users.