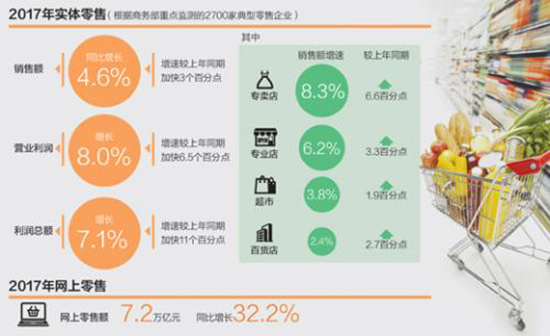 According to recent statistics released by China’s Ministry of Commerce (MOFCOM), the sales of 2,700 key typical retail enterprises rose by 4.6% year on year in 2017, 3 percentage points higher than that of last year over the same period.

Convenience stores are a miniature that shows signs of the recovery of the retail industry. The overall business index of China’s convenience stores was 71.28 in the fourth quarter of 2017, 2.03 higher than that in the third quarter, said a report issued by the MOFCOM.

The statistics of different businesses of typical retail enterprises showed that in 2017, the sales of specialty stores, pro-stores, supermarkets, and department stores increased by 8.3%, 6.2%, 3.8%, and 2.4%, respectively, 6.6, 3.3, 1.9, and 2.7 percentage points higher respectively than those of the first half of this year over the same period of time.

Online and offline retail have always been considered rivals to each other. Some people even attributed the previous fall of market share of the real economy to the diversion of e-commerce.

“Online and offline competition is not a ‘win and die’ situation, and ‘survival of the fittest’ is the only market law,” said Li Keaobo, Executive Secretary General of Center for China in the World Economy under Tsinghua University.

After timely adjustment, offline retail still has the opportunity to win the market share because of its unique advantages in meeting consumers’ demand.

The narrowing gap between online and offline prices is the primary reason for the recovery of offline business. “Now the prices offered at online platforms and department stores are almost the same,” said a consumer named Cai Wei, adding that he prefers the latter since it features more credibility.

“China’s online and offline retail are experiencing integration and common development,” noted Ren Guoqiang, senior partner of the global strategy consulting firm Roland Berger. More Chinese retail enterprises have realized that innovation, enhanced operating capability, and the upgrading of consumer experiences are the only way of development, he said.

“But we still have to further improve the business environment for retail industry,” said Li. According to him, the online-offline integration calls for a fair and orderly competition environment.

Currently, online retail sales account for 15% of the total retail revenue in China, and a well-built monitoring system would better guide the direction for its future development.