The trial was designed to test the vehicle’s performance under sweltering conditions in Qatar’s capital Doha, where the highest land surface temperature in recent days reached 70 degrees Celsius.

The test is being carried out on a 7 kilometer-long route, which is longer than previous system tests conducted in Chinese cities. The test is expected to last until July 24. Officials with Qatar’s ministry of transportation ride the bus. (Photo/thepaper.cn)

An independent third party is supervising the test. Qatar’s ministry of transportation will decide whether to introduce the smart vehicle based on the test results.

Although the soaring temperatures are a challenge for the battery cooling and air conditioning systems, the Chinese company is confident that the car could survive the extreme environment, assured Peng Zhonghong with CRRC Zhuzhou Electric Locomotive Institute, the developer of the car. 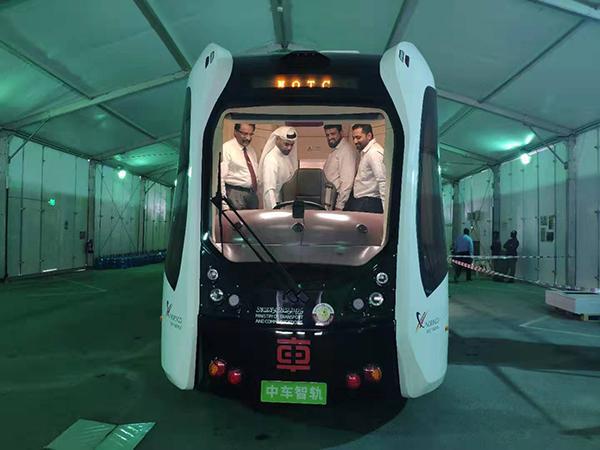 Officials with Qatar’s ministry of transportation ride the bus. (Photo/thepaper.cn)

The electric vehicle is equipped with sensors that can read the dimensions of a road, enabling it to plan its own route automatically.

So far, the test is going well. If the car goes into operation, it will improve national transportation and provide high-quality services for the FIFA World Cup in Qatar in 2022.