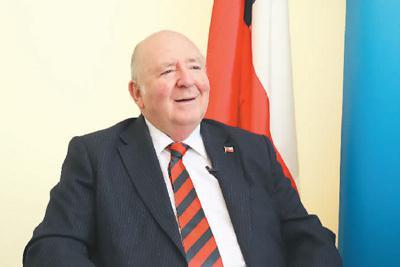 While salmon, cherries and red wine from Chile find favor with Chinese consumers today, they were not so popular back in 1991, when Luis Schmidt, now Chilean ambassador to China, came to China for the first time and introduced home-made products to the Chinese people.

It seemed that Chinese consumers believed that those exotic products from Chile either didn’t suit their needs or were too expensive, said Schmidt.

Schmidt, however, still believed that with a large population, the Chinese market was filled with great potential.

It turned out that he was right. Today, China has become the largest overseas market of Chilean red wine and Chile is the largest source of fresh fruits for China.

The popularity of Chile’s red wine and fruits in the Chinese market is also a reflection of the progress of the Chinese economy and society.

“I really admire China for its achievements in the past 70 years, especially since its reform and opening-up in 1978,” said Schmidt, pointing out that China has become the world’s second largest economy and contributed over 30 percent to world economic growth.

Chile is the first Latin American country that has signed bilateral free trade agreements with China, and the two countries have since achieved leapfrog development in economic and trade cooperation.

Back in 2010, China only ranked tenth in terms of trade volume with Chile, yet it has now become the country’s largest trading partner, Schmidt pointed out.

Over 1.5 million Chilean people in the fruit business have benefited from trade with China and some farmhouses in Chile have been transformed into big companies.

Schmidt noted that the bilateral cooperation has expanded from fruits to services and investment, among others, which he thinks has brought more business and development opportunities for Chile.

He also believes that the Belt and Road Initiative (BRI) will usher in a new chapter of bilateral cooperation in infrastructure, trade and investment.